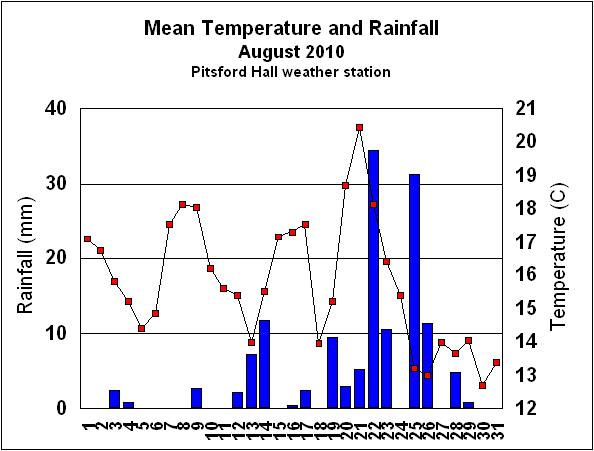 Headline:   The wettest August locally since 1917. Very changeable marked by a succession of Atlantic lows and trailing frontal waves.

Low pressure centred over Shetland dominated the picture at the start of August, although a ridge of high pressure began to build in temporarily from the south-west during the first two days. The 1st and 2nd were dry days consequently across Northamptonshire with spells of sunshine, more especially on the 2nd and just a light breeze. However, the high began to retreat on the 3rd as frontal systems drove in from the west introducing outbreaks of mainly light rain.

Another Atlantic low swept across a few days later on the 7th , but this system had lost much of its strength as it moved eastwards and the county saw little more than trace amounts of rainfall and cloud. Following another brief lull with high pressure filling the gap on the 8th, more substantial rain was delivered to the county on the 9th. In fact, the 9th saw the start of a wet spell as low pressure dominated the picture across the British Isles becoming fairly stationary finally winding up over the North Sea on the 14th. The 13th and 14th were particularly wet across Northamptonshire with 7.3mm and 11.7mm falling on respective days at Pitsford. With the wind also swinging round from the north it also became cool for the time of year with temperatures on the 13th struggling at 16C.

By the 15th high pressure west of began to push eastwards across the . Whilst this brought some good spells of sunshine on the 15th and again 16th, it didnt remain completely dry. Low pressure over the intensified and introduced a brisk northerly wind across eastern areas and a weak frontal system introduced outbreaks of rain. Conditions then became gradually more cyclonic across the dominated by two distinct low pressure centres to the east and west. Frequent showers separated by spells of sunshine marked the weather across the county during this period until the 19th which saw a fairly prolonged spell of rain overnight into the 20th. However, this rain would clear to warm sunshine later in the day.

A deep low tracked past the north-west over the next couple of days and this left a trailing frontal wave across the southern half of the . It was this front that was responsible for a particularly wet day on the 22nd as 34.5mm of rain was recorded in just over 8 hours at Pitsford. Localised flooding became widespread across the county as severe weather warnings were issued.

As the main area of low pressure moved away to the north-east, conditions settled down for a while on the 24th, although it remained fairly windy. Peak gusts at Pitsford reached 41mph, unusual for the summer. However, the dry spell would be a relatively short window as an active low moving up from the south-west would deluge the county with further prolonged and heavy rain on the 25th and 26th. A total of 42.6mm of rain was recorded in the 48 hour period from 0900GMT on the 25th to 0900GMT on the 27th. Again it remained fairly breezy.

As the month came to a close, high pressure over the North Atlantic would extend its influence towards the British Isles, yet it failed to prevent the ingress of yet more weather fronts from the north-west on the 28th which produced a couple of unsettled days across the county marked by a fresh westerly breeze and sharp showers. Nevertheless, the high finally managed to position itself right across the on the 31st to ensure at least that the August Bank Holiday would be fine and dry with plenty of warm late summer sunshine.

Click here to view the full climatological register for August 2010.

Click here to view the weather diary for August 2010.

The weather station publishes a full Monthly Weather Report (ISSN 1741-4733) which is distributed to libraries across Northamptonshire. This report comprises a full UK weather diary, reports of extreme weather events across the county, statistics from Pitsford Hall's affiliated stations across the county as well as news from the weather station itself. Individuals may download this report for £2 or take out an annual subscription for the paper-based report for £25. Click here for further details.