Notable double rainbow observed at Pitsford during the afternoon just before the arrival of a cold front. 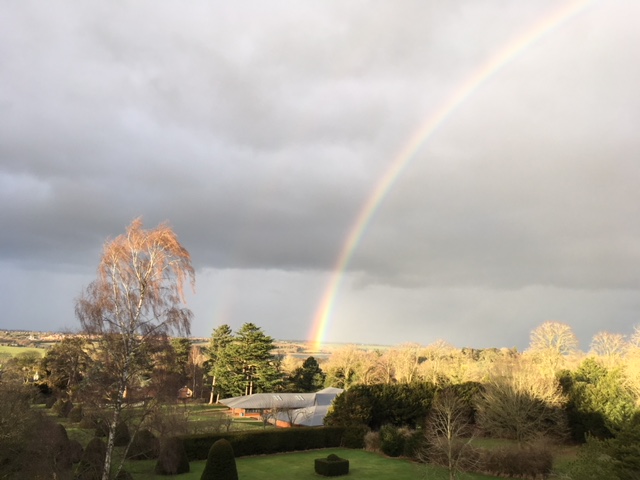 The county is hit by strong winds, gusting to 62mph at Pitsford and even higher at other locations across the county. Winds of up to 71mph are recorded at Brixworth. Up to 35,000 homes lose power across England and Wales, and transport is badly impacted with bridges closing, ferries being cancelled and roads and railways blocked by fallen trees. The Met Office is criticised for not naming the storm which was later christened Storm David by the French meteorological service. David quickly followed on the heals of Storm Fionn which affected Ireland. Parts of the county experienced some minor structural damage, but the impact was more severe elsewhere where gusts of up to 95mph were recorded. 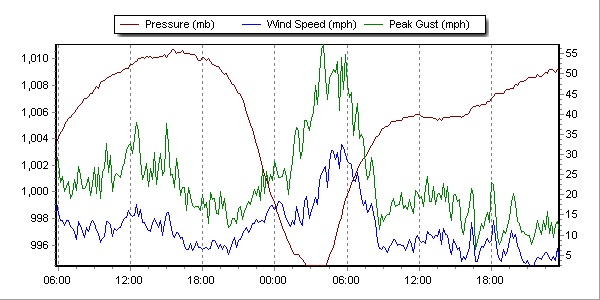 Above: Recordings of pressure, average 10 minute wind speed and maximum gusts recorded at Pitsford Weather Centre from 06:00hrs on the 17th during the passage of Storm David. 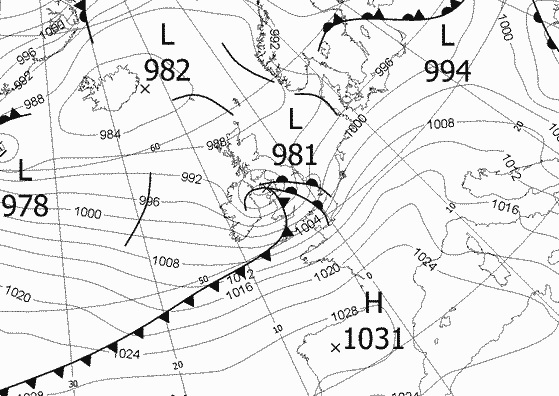 Above: Synoptic chart showing the position of Storm David at 00:00hrs on the 18th.

The county wakes to a covering of snow and further significant snowfall during the course of the morning that results in slippery stretches on much of the county's road network for a time before the snow is finally replaced by heavy rain through the afternoon. 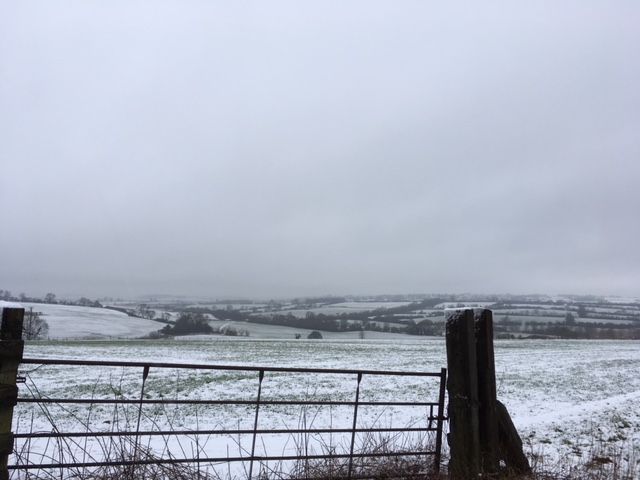 Above: Snowfields west of Brixworth rapidly disappearing with the arrival of rain during the afternoon of the 21st.

Following several days of falling temperatures owing to the import of colder air from the east, the well-publicised 'Beast from the East' finally arrives in the county marked by light snow showers during the afternoon, falling heavier through the evening and overnight into the 27th. The county escapes relatively unscathed on the first day, compared to areas further north and south. However, as a precaution against the snow a reduced timetable is introduced for rail services. A 3 vehicle collision is reported on the A43 into Northampton during the morning rush hour on the 27th, but the crash is not thought to be related to the weather conditions.

The cold weather had been forecast owing to the earlier occurrence of a period of sudden stratospheric warming; during which waves created in the upper atmosphere slow down and reverse the normal mild westerly airflow across the British Isles.

Above: the gradual downturn in temperatures leading into the 'Beast from the East' cold snap. 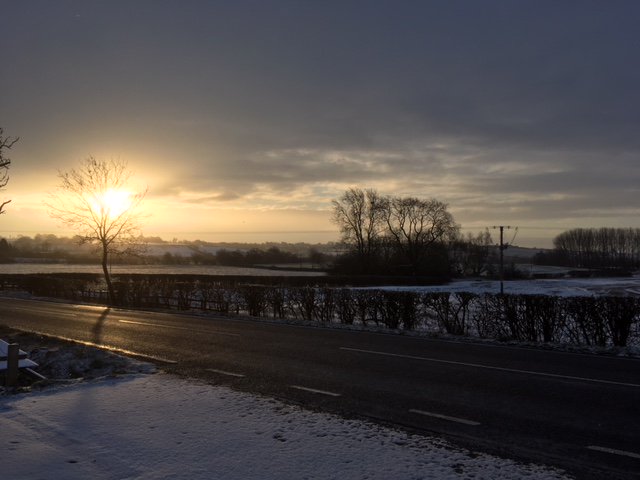 Above: A very cold and snowy sunrise on the 27th near the kennels at Brixworth. 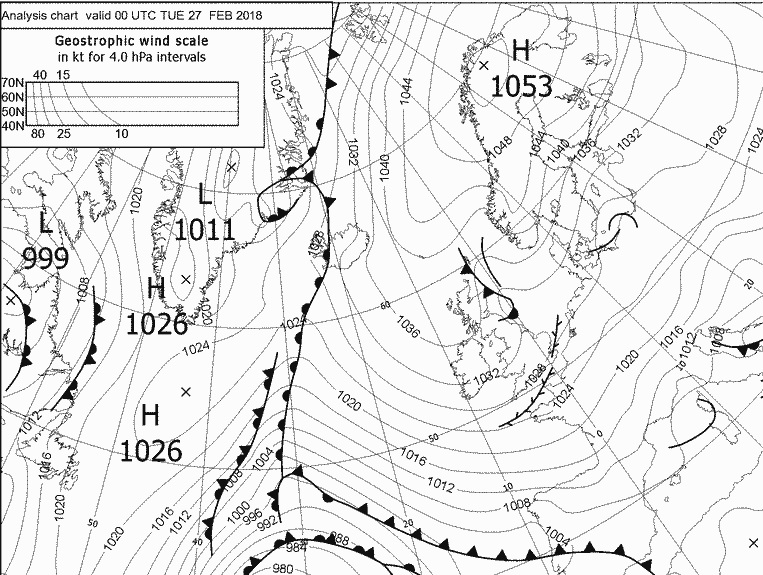 Above: the extensive high developed over Scandinavia feeding in cold air which can be traced as far back as Siberia.

Further snow showers feed in across the region during the morning with some signifiicant falls of snow in the north of the county towards Market Harborough, Kettering, Corby and Peterborough. A number of minor roads become impassable and a 20 mile section of the A1 is closed near Peterborough owing to the jack-knifing of several lorries. Snow showers continue for much of the day, falling heavily at times, finally fading away during the late afternoon. Daytime temperatures remain below freezing all day with a maximum of -1.6C recorded at Pitsford and plummet during the evening under clearing skies below the predictions of the Met Office. 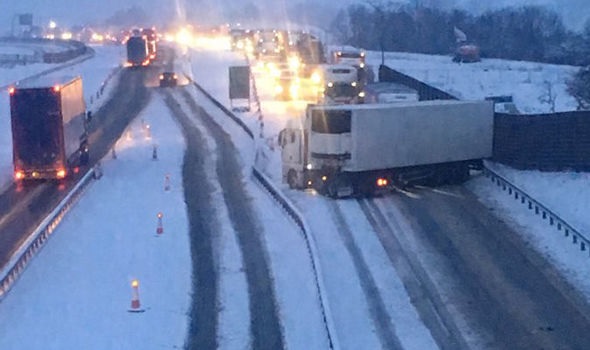 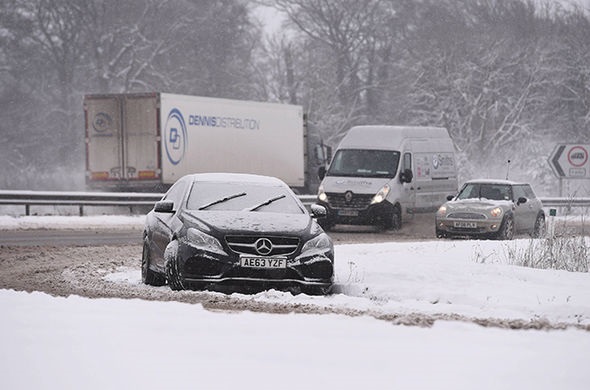 Above: traffic chaoes on the A1 close to the Northamptonshire border.

Above: trends in temperature (actual, apparent and wind chill) observed at Pitsford Weather Centre in the run up to and including the first two days of 'The Beast from the East'.

Severe cold weather continues with steady falls of snow through the morning, but with a fresh easterly breeze drifting snow results in further problems on the county's roads. Roads closed due to drifting snow and abandoned vehicles include the A428 in West Haddon and the main route between Corby is Rutland. Over 40 schools across the county close completely or later in the day owing to the deteriorating road conditions. Night shelters respond to the severe wind chill by opening early and providing extra resources for the homeless. Heavy falls of snow during the early evening result in several roads across Northampton becoming gridlocked. Particularly badly affected are Wellingborough Road, Lumbertubs Way, Saxon Avenue,  the A45 Nene Valley Way and the entire road from Roade and Billing Aquadrome. 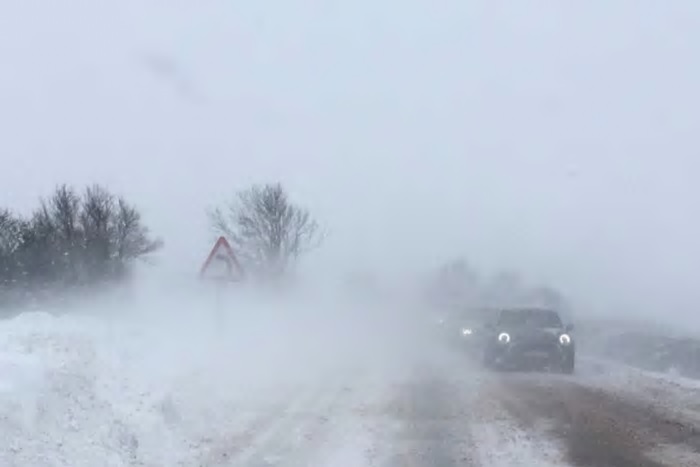 Above: Drifting snow and blizzard conditions create problems on the county's roads on the fourth day of exceptionally cold weather attributed to the 'Beast from the East'.

The Big Freeze continues with further heavy snow falling through the afternoon which, accompanied by a strong breeze, results in continued problems with drifting snow. Some backroads become impassable and abandoned cars quickly become enveloped by the snow. Drifting snow from Abington Park in Northampton blocks Park Avenue South off Wellingborough Road and the Newport Pagnell Road between Hardingstone and Hacknell is closed. Collisions are reported on many main roads including the M1 involving a lorry. With the heavy snow forecast, the increased demand on local food shops results in shelves being quickly cleared of essentials such as bread. 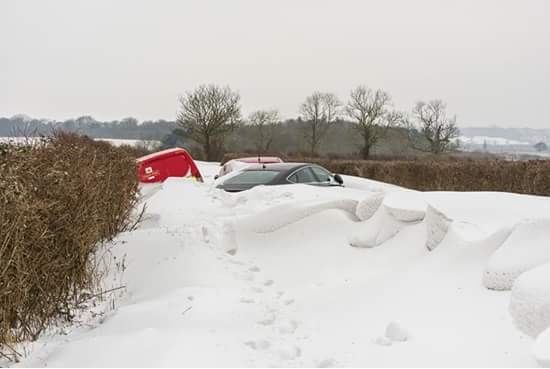 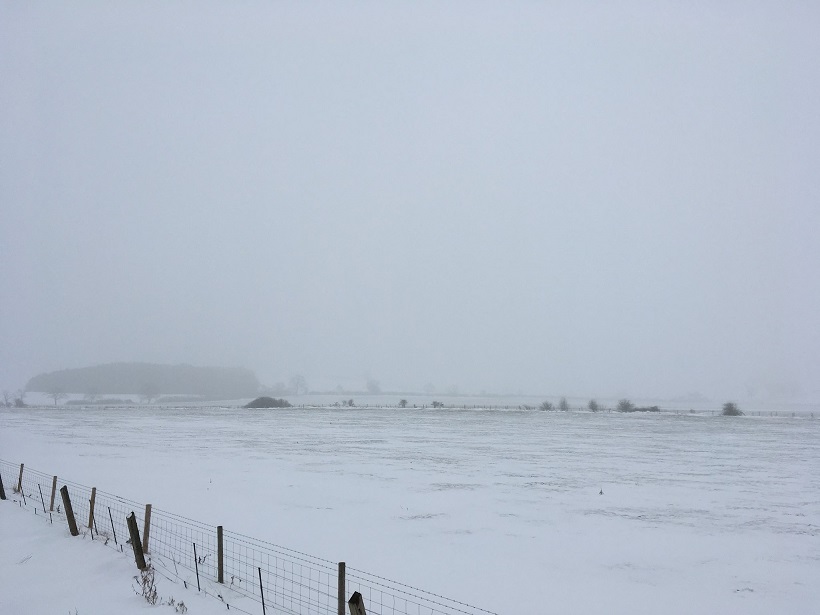 Above left: abandoned vehicles in drifting snow on a country lane; above right: Siberia meets Northamptonshire - a frozen landscape north of Brixworth. For further images of the Big Freeze see our Facebook gallery.

Thunderstorms bring torrential downpours of rain and flash flooding to parts of Northampton. More than 100 properties in St Leonard's Road in Northampton are flooded. Lane closures are reported on the M1 and A45. Dozens of cars become stranded in the floodwaters. The storms are accompanied by significant hail stones. 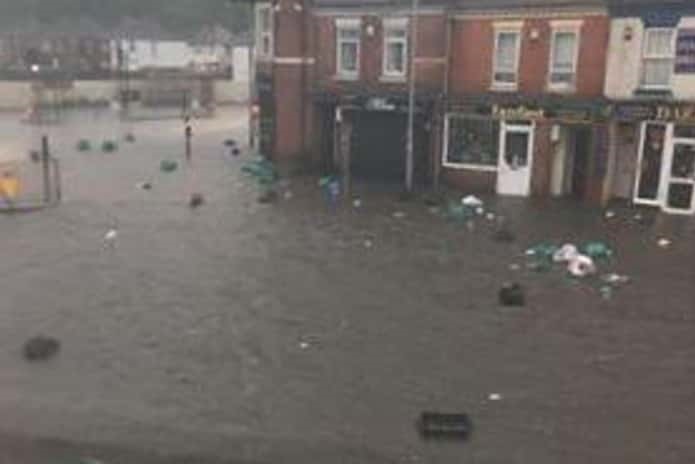 Flash flooding in Far Cotton, Northampton during the evening of 27 May following thunderstorms.

Temperatures at Pitsford reach 28C sparking a heatwave that would last for a whole month, only occasionally being tempered by the introduction of a northerly breeze.

Longest dry spell on the local record ends following 37 days without any significant rainfall. 0.2mm on the 13th June is the last recorded rainfall and June itself is recorded as the driest since 1925.

Daytime temperatures at Pitsford reach 32.9C sparking some sharp showers. Whilst the 27th sees temperatures soar to 29.5C, the triggering of further thundery showers brings the heat wave to an end with notably cooler conditions on the 28th.