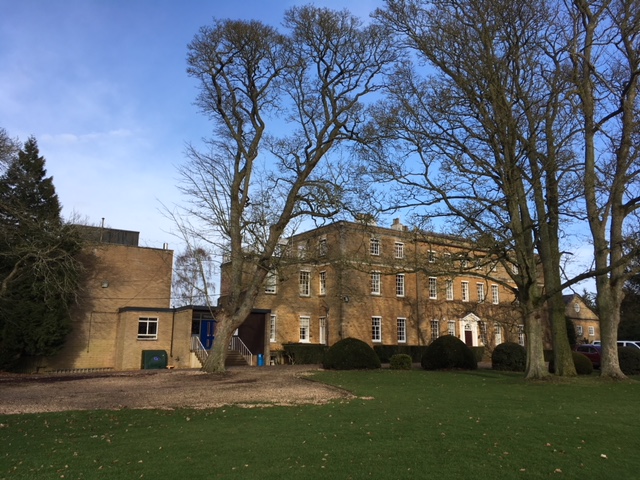 Pitsford Hall was built by Lieut Col James Money (1724-1785) in 1775. George Henry Drummond purchased the estate in the 1920's from Henry Lloyd who had bought it in c1886. After the Second World War, Captain Drummond retired to his estate on the Isle of Man and the Hall was used as a convent school by the Polish order of the Holy Family of Nazareth up until 1985. Pitsford School, formerly Northamptonshire Grammar School, was opened in September 1989.

The Prince of Wales (later King Edward VIII and then the Duke of Windsor) and the Duke of York (later King George VI) were regular visitors, coming to Pitsford to hunt with the Pytchley Hunt. Captain Drummond's youngest daughter (maybe this was Diana?) is about the same age as H.M. the Queen and was one of the children who was taught by a tutor at Buckingham Palace. This royal connection was re-established in 1992 when H.M. the Queen Mother visited Pitsford Hall to dedicate the Foundation Stone of the School's Michael Robinson Memorial Library.

The Early History of Pitsford Hall (by William Millar 2001)

Pitsford Hall was built by Lieutenant Colonel James Money who fought at the Battle of Minden and was MP for Northampton. He was born in Wellingborough in 1724.

His father was Francis Money, a "maltster" of Wellingborough, of whose antecedents little is known, but there is a family tradition that he may have been of French Huguenot origin. His mother was Elizabeth Washbourne who came from an old, landed Worcestershire family with an illustrious history of service to the crown stretching back to the conquest. It was almost certainly her family money that paid for the construction of Pitsford Hall.

In 1646 Elizabeth's great grandfather John Washbourne was fined the sum of Ł797 by Cromwell for his part in the Siege of Worcester. But this did not damp his royalist ardour for in 1651 he led forty horsemen into the Battle of Worcester for the King, at which he was presumed killed in action.

In 1653 John's son William inherited estates in Pytchley, Northamptonshire and in 1663 the family decided to relocate there from their Worcestershire base. William Washbourne's son was also called William and he married Hester Ernle whose grandfather had been Chancellor of the Exchequer at the time of Charles II and James II. Hester's mother was Vincentia Kyrle, daughter of the Sir John Kyrle.

William Washbourne (junior of Pytchley) and Hester had twelve children, one of whom was Elizabeth who married Francis Money in 1723. Their married life was poignantly short and having given birth to a son James in 1724 and next year to a daughter Mary, who died aged three weeks, Elizabeth sadly died on 2 March 1726.

The baby James Money was brought up by his maiden aunts, Elizabeth's sisters, in Pytchley, and nothing is known for certain of Francis' subsequent life, or even when he died or where he was buried.

In 1743 James' uncle Ernle Washbourne, who was the heir to the Washbourne estates, died unmarried and bequeathed James Money the sum of one hundred pounds in capital and an income of Ł20 per annum for his life. On the strength of this the nineteen year old James married, later on in the same year, Eugenia Stoughton, daughter of Sir William Stoughton of Warwickshire. James was probably by now beginning his career as an army officer.

In 1746 James Money purchased for Ł250 land in Pitsford that had been previously owned by one Humphrey Hales who died in 1742. It appears from a survey dating from 1763 that the house that came with this estate had a floor area of 3 rods and 30 poles (about 100 square yards), and was situated just behind the street frontage near to the junction of Moulton Road and Grange Lane. In other words it was not the present Hall.

It seems that the acquisition of this new estate was related to the raising of a family as a son and heir William Money was born in April 1748 and baptised at Pitsford. Subsequently there were four other children, only one of whom , George, survived to adulthood, but he died unmarried in Barbados.

By 1754 James Money had been promoted to Captain in Colonel Stuart's Regiment, the 37th, which fought at the Battle of Minden, then to Major in 1759, in 1762 he is listed as having attained the rank of Lieutenant Colonel. Later he became Member of Parliament for Northampton.

In about 1775 he decided to build a more imposing house on his land in Pitsford and he employed the Leicester-born architect John Johnson (1732-1814) to design it. This man later became surveyor to the county of Essex and is best known for designing the Shire Hall in Chelmsford but also built Kingsthorpe Hall and Carlton Hall in Northamptonshire. This house comprised the oldest part of what is now Pitsford Hall. Johnson was particularly known for his design of staircases.

James Money died in 1785 and is buried in Pitsford Church where there is a very fine marble memorial to him and two of his sons who died young. The estate is thought to have remained in the Money family until it was sold in 1846 to the Overstone family. 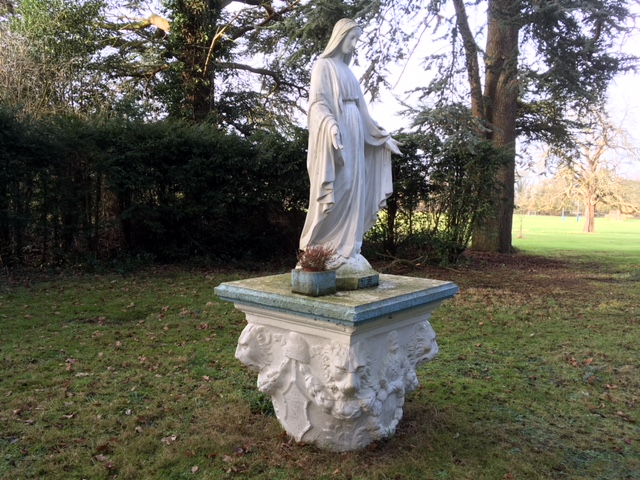 Statue of the BV Mary in the school grounds dates from when the hall was a convent school.