Temperatures fall sharply between 16:00 and 16:10hrs associated with the passage south-eastwards through the county of cold front. A drop of 2.3C is recorded at Pitsford (8.5C at 16:00, followed by 6.2C 10 minutes later). Winds also switch from a steady south-westerly to a north-westerly at the same time. 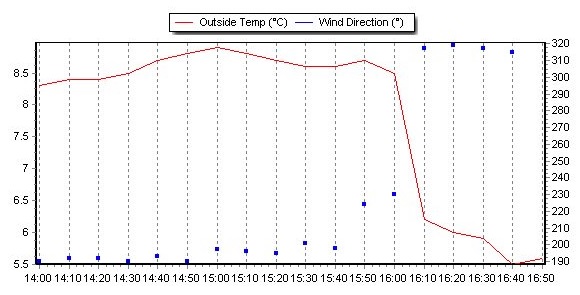 Sudden drop in temperature and wind direction associated with the passage of a cold front during the late afternoon of 9 January 2017.

Storm Doris sweeps across the county causing widespread travel disruption. Wind speeds at Pitsford reach gale force during the afternoon with a peak gust of 57.9mph recorded at 14:47.  Several roads are closed due to fallen trees and branches, including Bridge Street and Abington Street in Northampton town centre, and there are reports of trees having fallen on to houses in Daventry and Holcot. Sidewind causes a lorry to overturn on the A43 near Hannington.  A glass panel on the roof of the Hope Centre in Northampton becomes partially detached causing the area to be cordoned off to the public. Winds gradually die down during the evening. 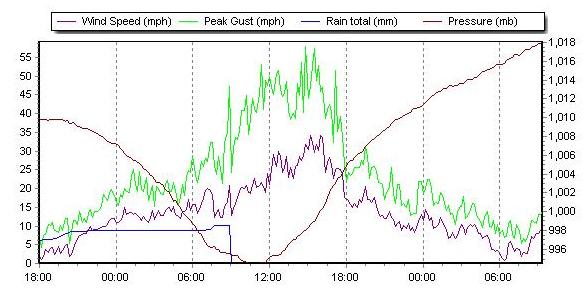 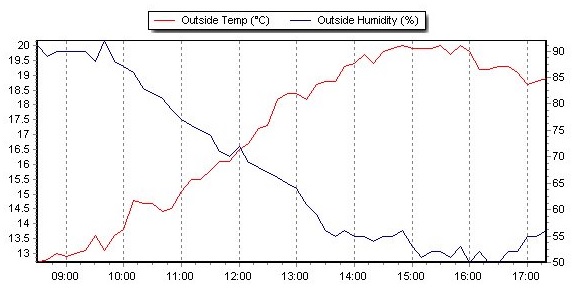 Temperatures soar as the county experiences a heatwave. Daytime temperatures reach 28.5C on the 17th, 29.6C on the 18th and then exceed 30C on the 19th and 21st with the 20th only being slightly cooler. The high of 31.9C recorded on the 19th represents the warmest June day in Northampton since 1976 when 34.0C was recorded. Some brief showers and rumbles of thunder during the morning of the 22nd introduce fresher conditions bringing the heatwave to a close. Despite the fresher conditions, dry conditions continue to prevail with the last significant rainfall recorded on the 9th.

The weather centre receives a report of a mini-tornado in the village of Pitsford during the evening. Eye witnesses report seeing trees swaying violently and a strong gust of wind sounding like an express train. There are no reports of any structural damage. Observations at the weather centre corroborate the report as wind speeds increased dramatically at 19:44 gusting to 32mph. 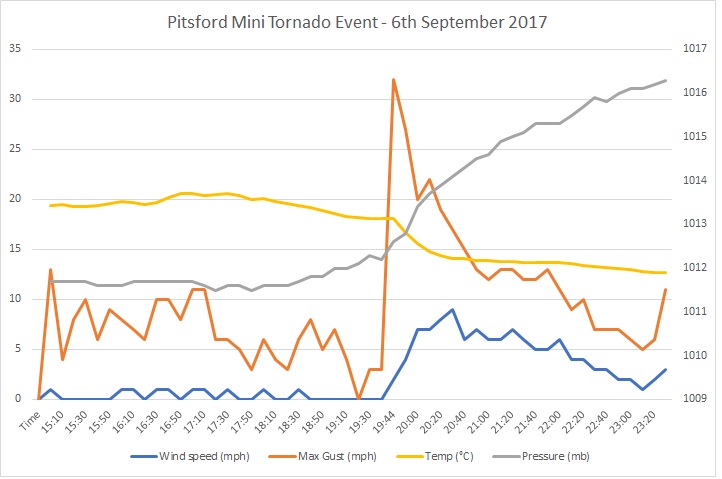 Observations made by the automatic weather station at the time of the reported tornado in Pitsford on 6 September. Click on graph to enlarge.

Winds increase across the county during the afternoon as ex hurricane Ophelia tracks across the Republic of Ireland. Whilst winds across Ireland exceed 100mph claiming the lives of 3 people, across Northamptonshire winds peak at just under 40mph. However. the 'red sun' is a notable feature caused by Saharan dust and smoke from Portuguese wildfires being drawn up on Ophelia's strong southerly airstream. 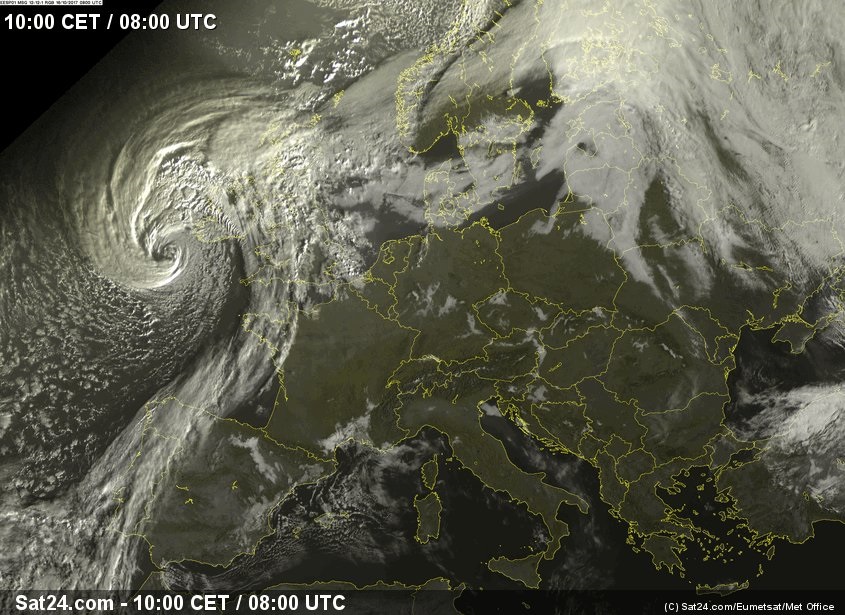 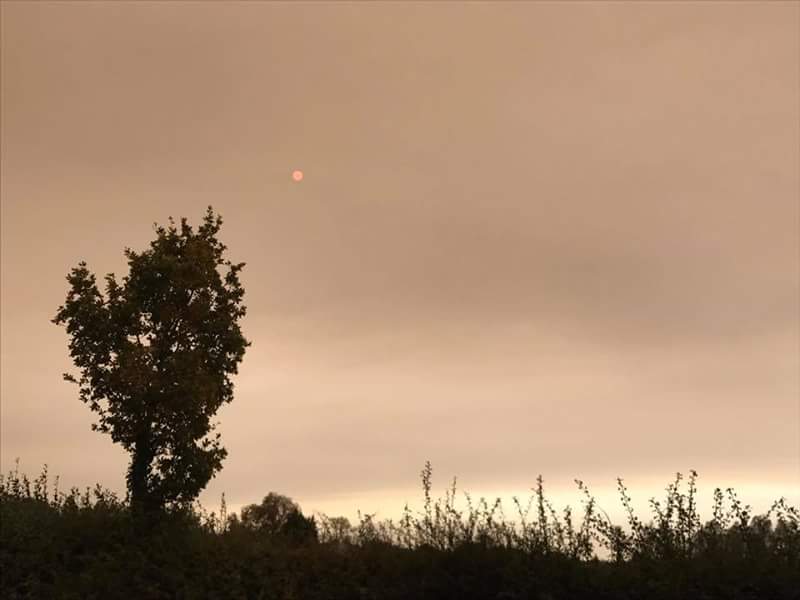 Left: Visible satellite image of ex hurricane Ophelia approaching the coast of Ireland at 08:00GMT on 16 October. Right: The 'red sun' observed across the county during the same afternoon.

Heavy snow in the early hours causes transport chaos across the county. Emergency services are despatched to rescue stranded motorists. Scores of abandoned cars and and a number of jack-knifed lorries are reported across the county. The rate of accumulation exceeds the capability of gritting teams to keep many routes open and several villages find themselves isolated. Most major routes are open by the early afternoon, but rural routes and some B roads remain difficult. 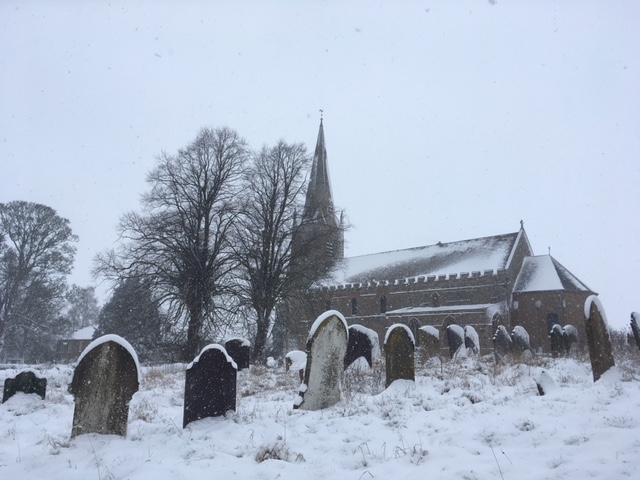 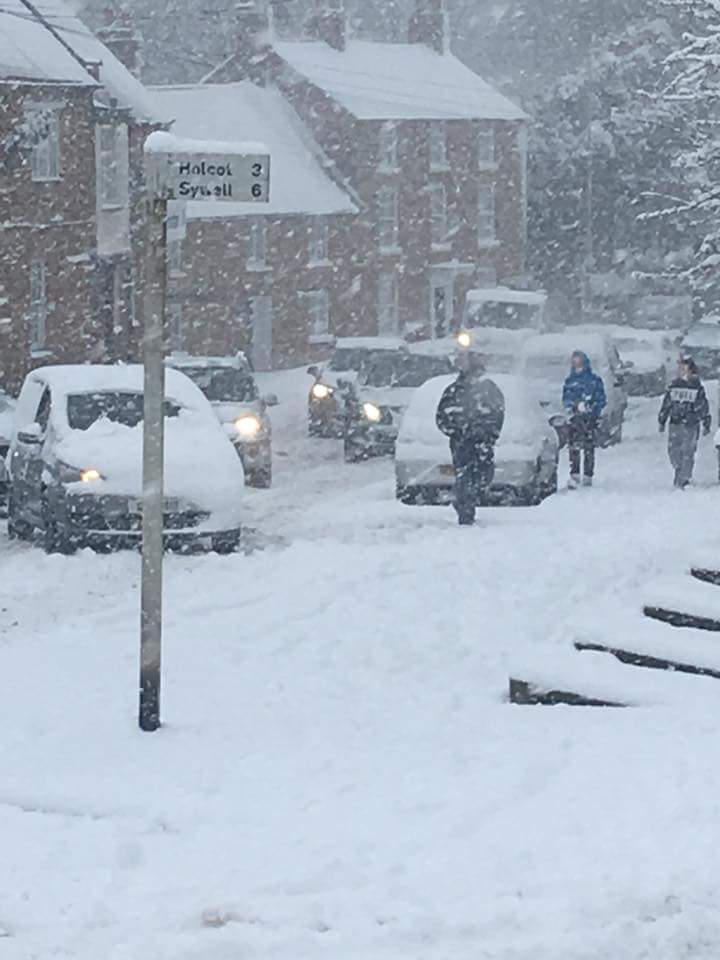 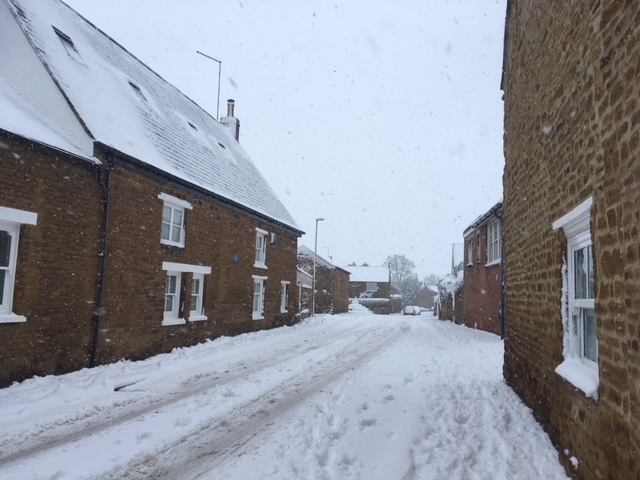 Images from around Brixworth following the first heavy snowfall of the winter season.

Following a mild Christmas Day, a cold front ushers in an abrupt change to colder air following heavy rain during the evening. 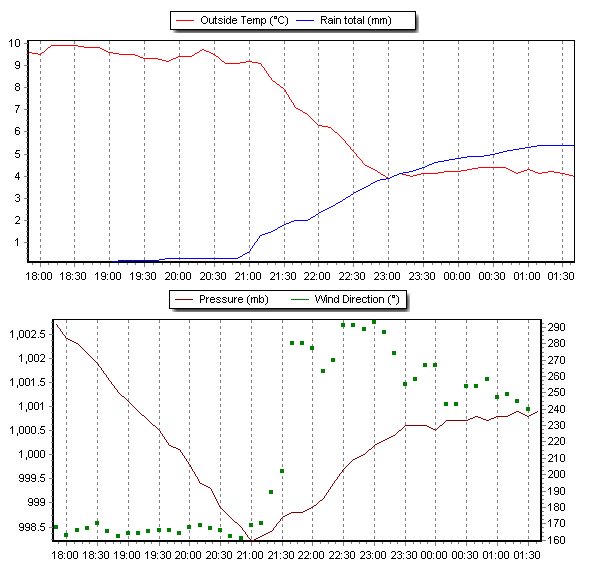 Above: Rapid transition to colder air following the passage of a cold front on Christmas night 2017.

A fine Boxing Day morning with prolonged sunshine leads into a prolonged spell of heavy rain during the evening, turning to snow overnight. Up to 5cm of lying snow in places on the morning of the 27th. A series of collisions around the county cause lengthy delays while emergency teams work to recover vehicles. Police officers are reporting seeing vehicles abandoned in snow-hit areas. The A14 is closed for several hours following multiple collisions between junctions 1 and 3 and flooding caused by the heavy rain results in lane closures on the M1 motorway at junction 16. A fallen tree partially blocks the A508 Harborough Road and there are numerous reports of fallen trees between Kelmarsh and Maidwell. Hundreds of homes are left without electricity as power lines are brought down by heavy snow. 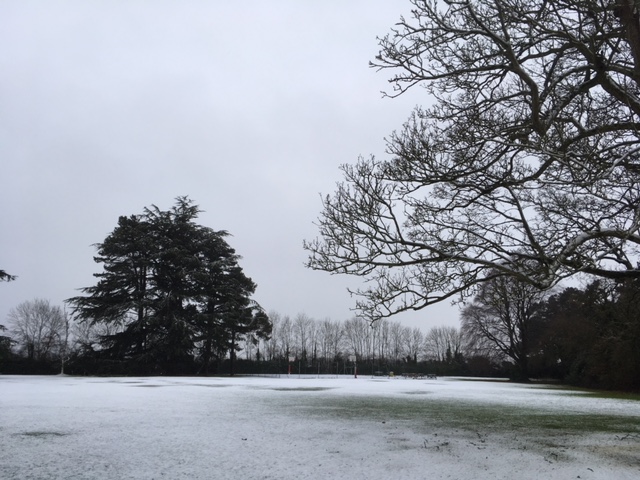 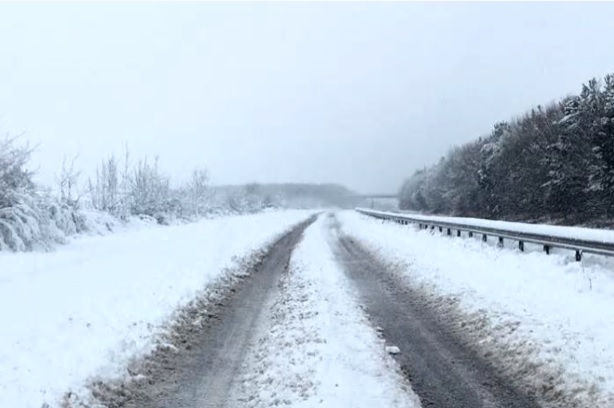 Above left: Lying snow at Pitsford Hall on the morning of the 27th. Right: The A14.

The weather extremes documented here are generally only those observed at Pitsford Weather Centre. Unconfirmed reports received of extreme events in other parts of the county are indicated by *.