A summary of notable weather events from across Northamptonshire.

The county experiences the force of Storm Ciara with gale force winds and driving rain. A peak gust of 59.5mph is recorded at Pitsford during the morning, but sustained high winds continue for much of the day. Fallen trees and branches cause travel disruption and there are several reports of structural damage including parts of the roof of the Sol Central building in Northampton.  Horsemarket remains closed in Northampton on the 10th to ensure safety to the public. Cineworld and 360 Play at Rushden Lakes also close owing to tiles being torn off the roof of the building. A lorry also overturns blocking the M1 in both directions near Milton Keynes. Records show that this was the windiest day locally since 5th December 2013 when 62mph gusts were recorded at Pitsford. The windiest day on the local record fell on 27th October 2002 when 70mph was recorded. 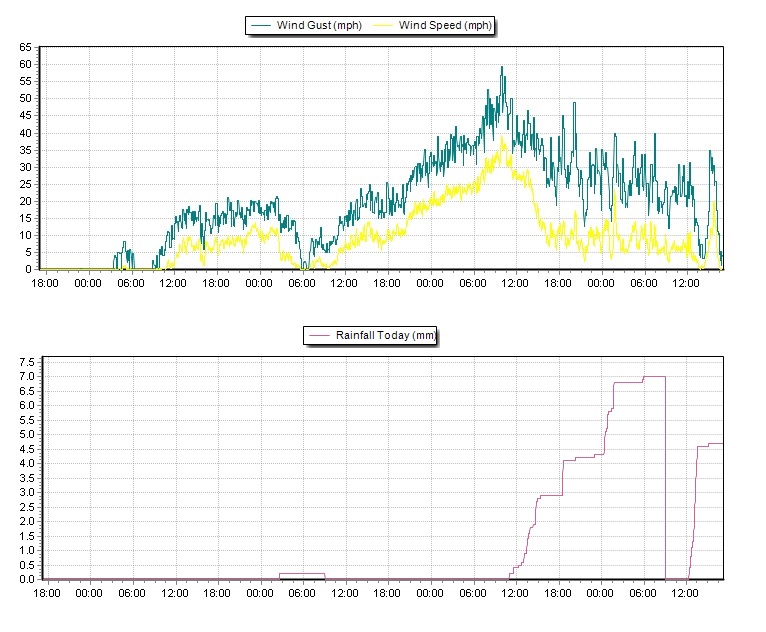 Wind and rainfall recordings made at Pitsford Weather Centre during Storm Ciara. The charts begin at 18:00hrs on the 6th, with the peak of the storm occurring through the morning of the 9th. 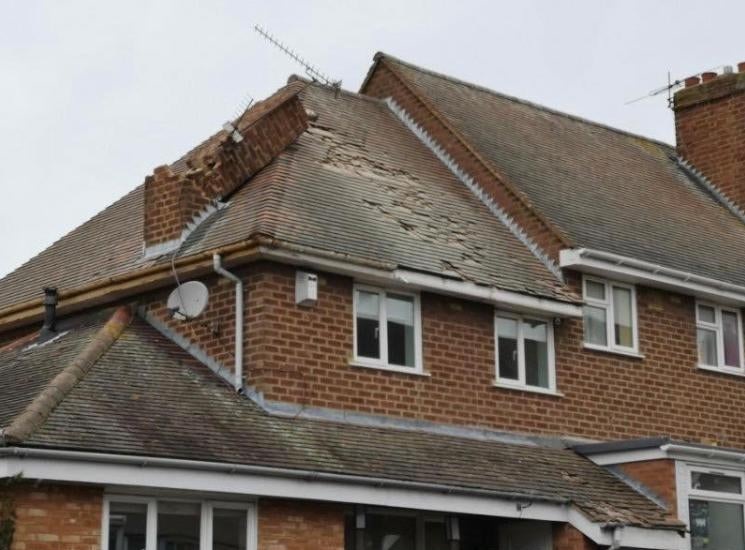 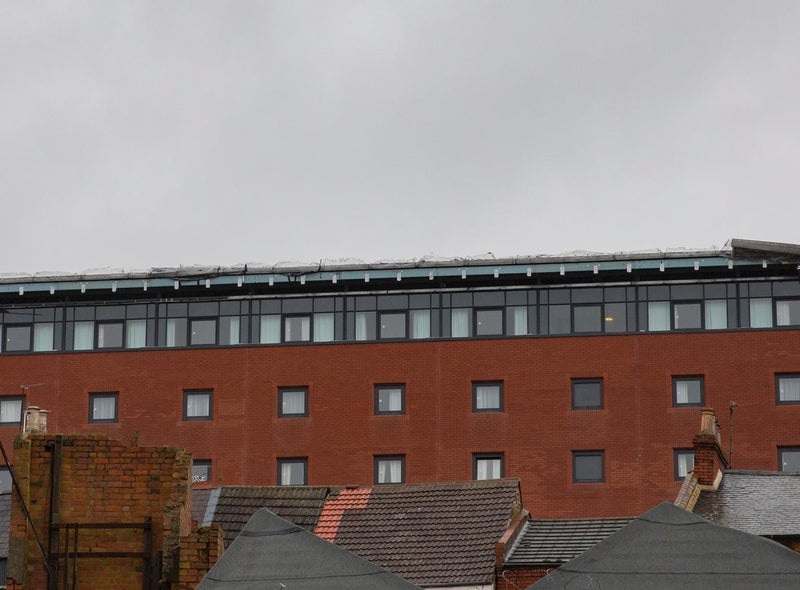 Scenes of destruction across the county caused by Storm Ciara.

A flood warning is issued for Cogenhoe Mill caravan park and other numerous flood alerts issued for parts of the rivers Nene, Tove and Great Ouse, as Storm Dennis brings heavy rain to the county overnight between the 15th and 16th. 13.9mm of rain is recorded at Pitsford over the 24 hour period ending at 0900GMT on top of the 7.6mm recorded the previous day. Horsemarket remains closed in Northampton as wind gusts peak at around 50mph. 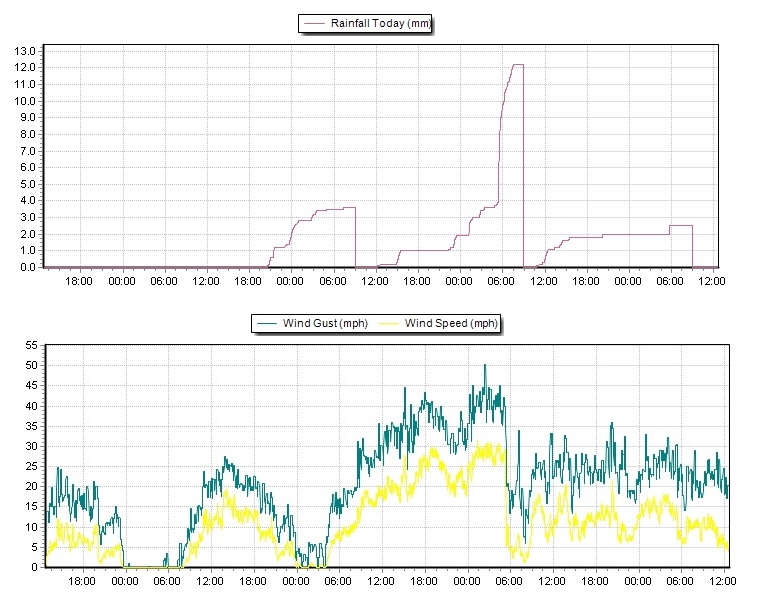 Rainfall and windspeeds recorded at Pitsford beginning at 14:00hrs on the 13th and running up to Storm Dennis on the 15th and 16th. Some torrential rain is recorded around 0600hrs.

A tornado touches down at around 20:00 BST as high winds and storms associated with a cold front sweep across Northampton. The footage shows it ‘ripping’ through the north side of the town. Gardeners at Moulton Allotments are left counting the cost as entire sheds are overturned and fence panels lifted from the ground. Others report tiles being ripped from rooftops, power lines coming down and trampolines and bins being lifted from gardens.In a typical year, the UK sees around 30-35 tornadoes each year, though it is very rare that are they strong enough to cause any significant damage. The tornado came after the Met Office issued a yellow weather warning for rain earlier in the day. 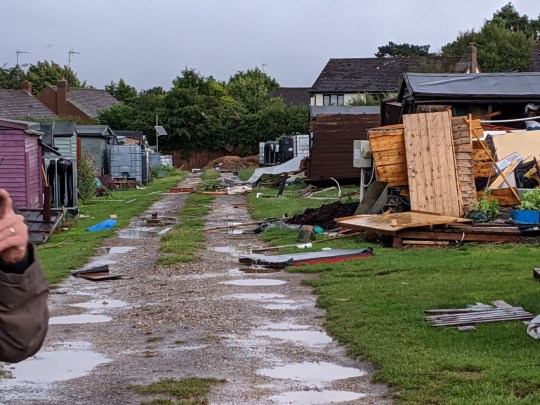 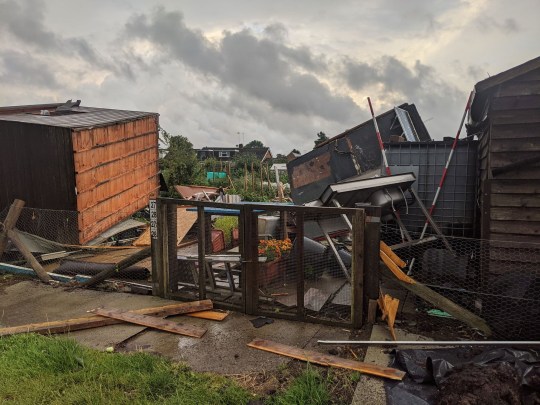 Above: damage caused to allotment sheds in Moulton by the tornado on 25 July.

31 July Temperatures at Pitsford reach 36.1C at 16:09 BST in the afternoon making this the warmest day since local records began in Northampton in 1880. The record beats the previous high of 35.6C recorded in August 1990.  The introduction of a cold front overnight brings the heat to an abrupt end with just one or two light showers, not the thunderstorms widely forecast. 13 August 3 days of temperatures soaring above 30C culminate in spectacular thunderstorms during the evening of the 12th, but more especially during the morning of the 13th when 10.7mm of rain is recorded at Pitsford and over 3,000 lightening strikes recorded in a large thunderstorm that tracked slowly through the county from the south-east.

Trends in temperature at Pitsford, Northampton showing daytime maxima peaking above 30C on the 10th, 11th and 12th August. The impact of the storm on the 13th clearly dampened the rise in temperature which was forecast to reach 27C. 24 and 25 August A deepening low, Storm Francis, tracks across northern areas introducing heavy rain and strong winds across much of the county. A total of 17.6mm of rain is recorded at Pitsford in the 24 hour period ending at 0900 GMT on the 25th with gusts reaching 45.4mph. High winds cause trees and branches to fall onto roads across the county. A large bough blocks the northbound carriageway on the A508 near the junction for Courteenhall and another tree falls onto the roundabout between A4256 Eastern Way, Braunston Road and Ashby Road. In Byfield, between Banbury and Daventry, a large tree falls onto a smaller tree but and blocked the A361 and another tree blocks the Welford Road in Chapel Brampton. The storm is also responsible for power losses to many homes and businesses. 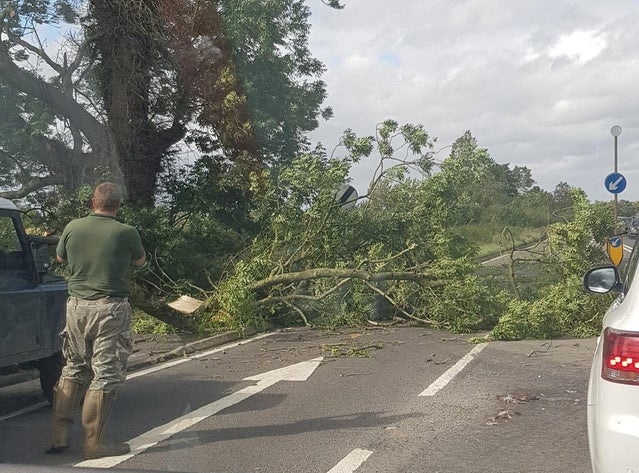 A large branch blocking the A508 near the junction for Courteenhall. 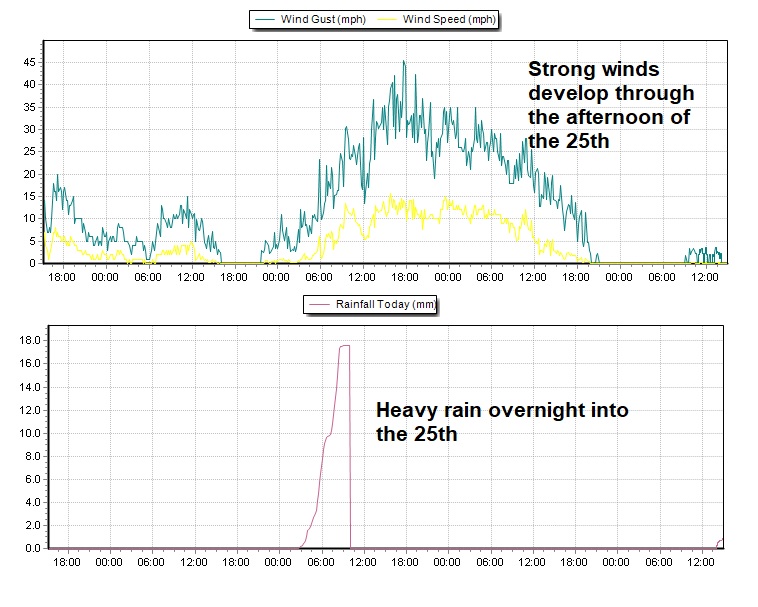 Weather data captured by the automatic weather station at Pitsford showing the intense rainfall overnight into the 25th followed by the strong winds which develop later in the day.
23 December

Prolonged and heavy rain results in flooding across parts of the county. 34.7mm of rain is recorded at Pitsford in the 24 hours ending at 0900GMT on the 24th. The river Nene bursts its banks in the St James area of Northampton resulting in the flooding of homes and some roads are rendered impassable. Drivers have to be rescued as vehicles break down in the floodwater. The flooding transfers downstream on Christmas Day with residents at Belling Aquadrome having to be evacuated. 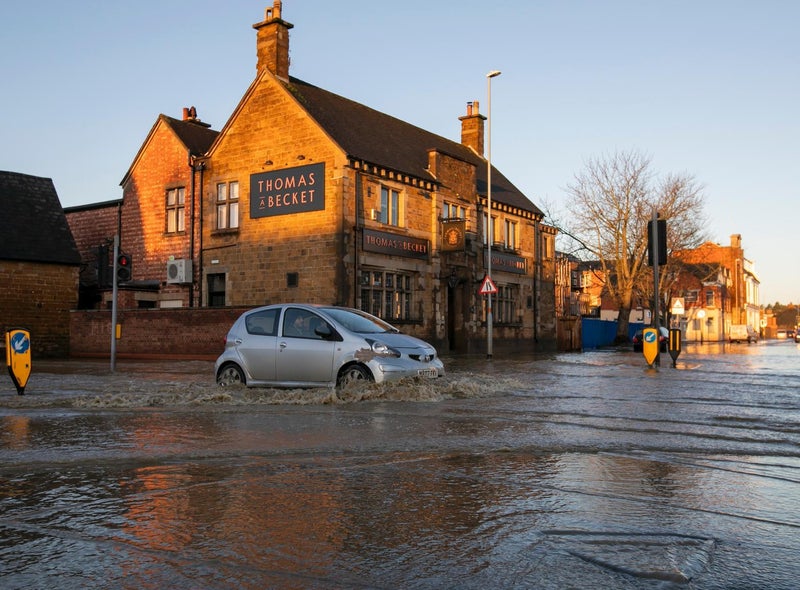 Flooded roads around the Thomas A Becket public house in Northampton following heavy rains on the 23rd.