Torrential rain recorded at Pitsford falling at the rate of 47mm per hour at 0740hrs. A total of 8.1mm is recorded over 2 hours.

Heavy rain strong winds cause problems in the morning rush hour associated with an intense low moving north-eastwards from south of Ireland. Winds gust to 39mph at Pitsford and 50mph is recorded at Brixworth*. Overall, January so far has been wet and very mild with daytime maxima typically 2 or 3C above average for early January, especially from the 5th onwards.

Sudden increase in wind speed during the early morning sees a gust of 62mph reported at Brixworth* and 39mph at Pitsford. Exact cause uncertain, but probable gust front associated with the passage of fronts tied into an intense low tracking to the north. Strong winds over the previous 24 hours linked to a forecast deep low tracking south of the county never materialised and made the events of the early morning more unexpected. 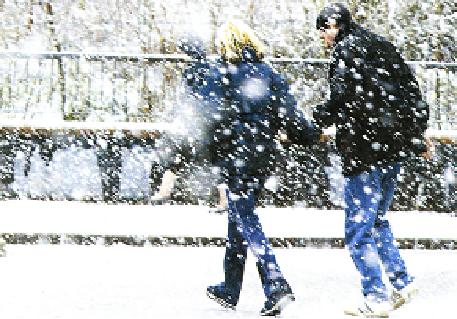 Sleet and snow tied into a small low tracking eastwards takes forecasters by surprise. Sleet was recorded at Pitsford at around 0930hrs turning to fairly substantial snow by lunch-time. A forecast of early morning showers moving quickly eastwards followed on by brighter even sunnier spells proved wholly inaccurate. Eventually 7cm of snow was recorded at Pitsford Hall, amounting to 13.4mm, one of the deepest snowfalls recorded in recent years.

Substantial snow, almost blizzard conditions at times, falls during the afternoon causing major traffic chaos throughout the county. Northampton becomes grid-locked for several hours and bus services are suspended. The M1 motorway was brought to a standstil in one of the worst motorway tailbacks Britain has ever seen stretching from Hertfordshire to Leicestershire. Temperatures following the snow plunge well below freezing with ice becoming widespread and producing treacherous conditions on even treated roads. Several accidents, including jack-knifed lorries, block primary routes into Northampton. 600 homes were left without power in the Bramptons and Harlestone.

Ice on roads throughout the county following heavy snowfall on the 28th results in the closure of many schools. A thaw of lying snow during the afternoon only enhanced the treacherous conditions once temperatures fell below freezing during the evening.

Gale-force winds and heavy rain cause flooding and power cuts in parts of the county as mild westerlies take over from the cold Arctic blast. A sudden downpour during the afternoon leads to fire and rescue teams responding to an influx of emergency calls. Firefighters were alerted to several homes within the space of half an hour to pump out water from properties. About 180 homes in Chapel Brampton are left without electricity after strong winds pulled down overhead cables. Other areas affected include Blisworth, Weedon and the Thorplands area in Northampton.

A weekend of strong winds causes minor structural damage across the county. Trees were uprooted in many areas. Peak gusts at Pitsford Hall were 54mph on the 7th and 50 mph on the 8th. High winds were recorded from the evening of the 7th and continued overnight and right through the 8th finally easing down by mid-afternoon on the 8th.

Snowfall overnight and through the morning rush-hour causes chaos across the county. Significant falls between 0745 and 0800hrs renders several routes across the county extremely hazardous with numerous accidents reported, including an overturned car in Chapel Brampton. The snow, on the leading edge of a warm front, was subject to a rapid thaw during the afternoon.

Strong winds batter the county, gusting to 50mph, 42mph and 59mph on the 18th, 19th & 20th respectively. Gale force winds on the 20th cause trees to be unrooted and dangerous driving conditions on the county's roads. Several garden centres close to ensure public safety. Gusts at Brixworth were reported to reach 85mph on the afternoon of the 20th. The clash between Northampton Town and Huddersfield was abandoned after 39 minutes after an advertising hoarding blew into one of the stands at Sixfields. Emergency services were kept busy as TV aerials and roof tiles were blown into public areas. Strong winds continued on into the 21st.

Three very warm days beginning on the 6th see daytime temperatures reach a blistering 30.0C at Pitsford Hall. Ironically, the height of the heatwave coincides with the transit of Venus - the passage of the planet Venus across the solar disc. Venus transits follow an irregular cycle - the next transit will be in 2012 and then there will not be another until 2117. A transit of Mercury, the closest planet to the sun will occur on 8 November 2006. Transits of Mercury occur more frequently between three and thirteen years apart.

First significant rainfall across the county since the 3rd ends 'drought' conditions across the county. With the exception of a couple of 'trace' readings on the 4th and 8th, the month was stacking up to be one of the driest Junes on record. Northampton's driest June was in 1925 when only 0.5mm were recorded. The second driest June was in 1962 when 5.1mm was recorded. So far less than 3% of the June average has been recorded at Pitsford Hall.

Freak 'gale' (possible 'gust front') passes through Pitsford and neighbouring villages at around 18:30hrs BST. Winds gust to 40mph and temperatures drop dramatically from 17.1C at 18:20hrs to 12.2C at 18:50hrs. Prior to the phenomenon a very warm afternoon saw temperatures climbing to 22.6C with 8.0hrs of bright sunshine. The progression of a weakening cold front tied into low pressure to the north-west is believed to have given additional uplift to trigger the event.  The warm weather brought out a large number of watersports enthusiasts on Pitsford water with havoc as the strong winds conveyed many helpless across the reservoir. Comparatively little rain was associated with the event, with just under 1mm being recorded in the vicinity of the reservoir.

Deepening low moving up from Iberia brings strong winds and driving rain across the county. 29.1mm is recorded over 10hrs at Pitsford Hall and winds gust to 42mph (force 8). The damage from falling trees and branches was made worse by the fact that trees were in full leaf. The county escapes the worst affects of the wind which were through Norfolk, Suffolk and Essex.

Torrential rain, thunder and lightning strike at 1700 BST when two thunderstorms collide over the west of the county. Homes are left without power, roads flooded, trees hit by lightening and brought down, and property damaged. Witnesses report a massive downpour while the police control centre deals with a large increase in calls including reports of a tree near the M1 "exploding" and showering debris across the carriageway after being struck by lightning.

On the A428 between West Haddon and Crick, a tree lands on a car and briefly traps the occupants. They manage to escape by climbing out of the back of the vehicle uninjured. In the village of Welton, north of Daventry, a greenhouse is torn apart and thrown around.

9.3mm of rain falls in 3.0 hours during a severe thunderstorm resulting in localised flooding in many areas including the High Street in Market Harborough. Witness reports describe the sound of the thunder as moving along the ground.

Hottest day of the year so far with a maximum of 30.8C recorded at Pitsford. The following night is also one of the warmest on record with an overnight low of 19.4C.

Prolonged and heavy rain delivers more than a month's rain in 24 hours in parts of the county. Oundle recorded 118mm in the 24 hour period from 0900 GMT. The heavy rain is believed to have been the cause of a old sewer collapsing in Northampton leading to the opening up of a five foot hole in Robert Street and subsidence of adjoining buildings. Flood warnings are issued for the Towcester and Brackley areas.

Four houses are struck by lightning as the county is hit by severe thunderstorms. 22.4mm falls in a little over 2 hours at Pitsford around lunchtime. Several buildings suffer flood damage and roads are under water in the St James area of Northampton. With the monthly rainfall for August currently standing at 111.8mm the county is heading for its wettest August since 1992 when 126.7mm was recorded.

Funnel cloud is reported and photographed in Earls Barton at 1800hrs BST.

Two days of heavy rain culminate in police imposing a blanket speed limit of 50mph on parts of the M1 during the afternoon of the 13th. 12.2mm was recorded over the 24 hour period between 0900hrs on 12th and 0900hrs on the 13th, with a further 14.2mm recorded over the next 24 hours to 0900hrs on the 14th most of which fell during the afternoon on the 13th. Manhole covers along the A5 near Towcester were pushed up by the force of the rain sending torrents of gushing water streaming along the carriageway.

13.7mm of rain causes localised flooding across the county. Flooding was reported at Abington Park in Northampton and at Boughton Lane in Moulton. A garage on the Wellingborough Road in Northampton was cordoned off as rainwater started pouring through the roof of the forecourt.

Snow falls during the early evening following persistent rain producing a thin covering. 20.5mm of rain, sleet and snow is recorded in the 24 hour period to 0900hrs on the 19th. The last time snow fell in November was on the 8th November 2001.