More than 1000 people are left in the dark as high winds cause a power cut in the south-east of the county.* Electricity is lost in 940 homes in Hackleton, Piddington and Horton from 17:30 hrs. A spokesman for East Midlands Electricity said the weather may have caused trees to hit power cables disrupting the line. 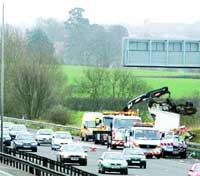 Gale force winds batter Northamptonshire, blowing down trees and masonry and causing a major blackout in the south of the county. More than 1000 homes in Brackley are left without power for several hours after falling debris brings down electricity cables in the area. A total of 90 000 homes across the East Midlands are affected by power cuts. Fallen trees also block several of the county's smaller lanes as winds reached 57mph at Pitsford Hall and in excess of 60mph in other areas*. Drivers on the M1 in the north of county face a 50mph speed limit because of the risk of the winds and delays owing to an accident  near junction 16.

Heavy snowfall during the morning rush hour brings chaos across the county on the 23rd. Twenty schools close as travel, particularly on minor routes, becomes treacherous. 7cm of snow is recorded at Pitsford Hall. A severe weather warning is issued for the 24th with prolonged heavy snowfall expected to cause serious disruption. As it turned out, although snowfall was fairly continuous most of the main routes were clear. The warnings of serious problems nevertheless led to further schools closing.

The coldest night of the year so far sees air minimum temperatures at Pitsford Hall falling to -4.0C and grass minima falling to -8.7C.

Rush hour traffic faced delays as much of the county sees a blanketing of snow. Snow began falling around 0630hrs at Pitsford Hall slowing vehicles to a crawl, especially on the A43. Temperatures overnight fell to around -3.0C and as frontal systems edged southwards against the cold air weather warnings were issued for the Midlands and East Anglia.

Intense thunderstorm works through the county overnight 30 April - 1 May. 6.4mm is delivered in an hour at Pitsford Hall with dramatic displays of lightning.

Daytime air maximum at Pitsford Hall reaches 28.3C making this the warmest day in May since 1997 (29.8C) and the fourth warmest May day since 1922 (30.4C). The exceptionally warm day brought an end to a run of below average temperatures for mid to late May. Despite the warmth, overall temperatures for May had been at least 1 degree below average.

Overnight air temperature at Pitsford Hall drops to 3.1C with a ground frost recorded at -0.4C (grass minimum). The low temperatures promote some discussion about record low temperatures for June. However, in Northampton there have been a number of Junes in the past with very low recorded minima, for example June 1991 (0.9C), 1987 (2.3C) and 1986 (2.9C). In fact, on record there have been 26 Junes since 1892 with air minima below 3.1C, the lowest being 0C in June 1892 and June 1893.

The county is gripped by unseasonally high temperatures. Daytime maxima climb from 26.1C on the 17th through 29.2C on the 18th finally reaching 31.0C on the 19th making this the hottest day in June since  1976 (when 34.0C was recorded in Northampton). The passage of a cold front overnight on the 19th-20th brings heavy thunderstorms and flash floods to northern parts of the UK, although the county escapes with little more than a cooler north-westerly breeze signalling the change on the 20th.

A particularly warm spell of weather comes to an end with a thundery breakdown across the county. Low pressure moving up from France joins forces with an eastward-moving frontal system to trigger torrential downpours. 22.3mm of rain is delivered in just under 3 hours at Pitsford Hall producing localised flash floods during the morning period. The heavy showers move eastwards during the afternoon which sees some brief glimmers of sunshine.

Spectacular thunderstorms work through the county during the evening tied into an active frontal systems 11.2mm of rain falls in just under 3 hours. There are reports of trees being struck by lightning.

23.1mm of rain falls over 15 hours at Pitsford Hall brings to a close a prolonged period of dry weather. With the exception of trace amounts on the 18th and 22nd, no rain has been recorded for the past 16 days.

Torrential downpours of rain in the early morning cause localised flash flooding across the county. 13.7mm of rain is recorded at Pitsford Hall in the space of just a few hours. The morning downpours herald a day of extra-ordinary weather across the Midlands with tornadoes being recorded in Peterborough and Birmingham, the latter causing significant damage to homes and some injuries.

A thunderstorm in the early hours delivers torrential downpours of rain across the county. 6mm is recorded by rainfall recorder in the space of 10 minutes at Pitsford Hall from 01: 30hrs BST with an intensity reaching 78.7mm per hour at 01:50 BST.

Temperatures soar to 31.0C during the afternoon making the last day of August the warmest of the month and, together with 31.0C on June 19th, the hottest day of the year. The high temperatures and humidity trigger spectacular thunderstorms during the evening. Most of the 10.2mm of rain is delivered between 1930 BST and 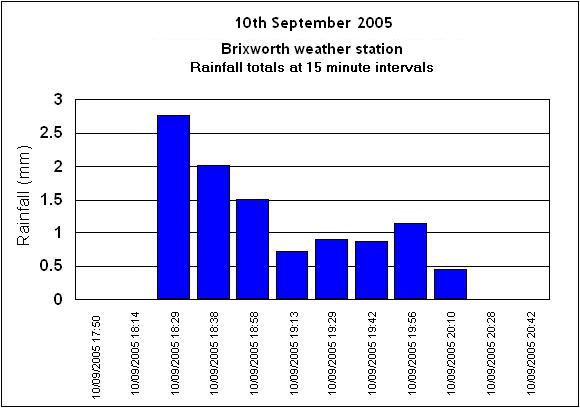 An unsettled week across the county is broken by an unseasonably mild October day. The daytime maximum at Pitsford Hall climbs to 20.1C several degrees above the norm for late October. 6.1 hrs of sunshine is recorded during what amounted to a very fine day.

Daytime maximum at Pitsford Hall reaches 17.8C making this the warmest November day since 1969. The very mild spell continues on the 3rd with 15.9C recorded during the day, temperatures falling only slightly overnight to 14.2C.

First air frost of the new autumn season is recorded at Pitsford Hall as air minima fall to -0.1C. A sharp ground frost (-4.0C) sees a widespread hoar frost at 0900GMT. Gritting vehicles take the forecast of frost the previous evening seriously and many roads across the county receive their first salting. Concrete minima at Pitsford fell to -0.3C. The cold temperatures are seen by many as a prelude of the colder the average winter forecast by the Met Office.

Overnight temperatures on the morning of the 20th fall to -4.0C making this the coldest November minimum since 1996 (-4.5C).

Wintry squall works southwards through the county during the afternoon as pressure deepens over the North Sea. Winds gust to 50mph at 14:00hrs GMT accompanied by a sharp fall in temperature and a shower of hail/ice pellets.

Frequent snow showers through the day deliver several centimetres of lying snow across the county. 2cm of snow is recorded at Pitsford at 0900 hrs before further falls later in the day.