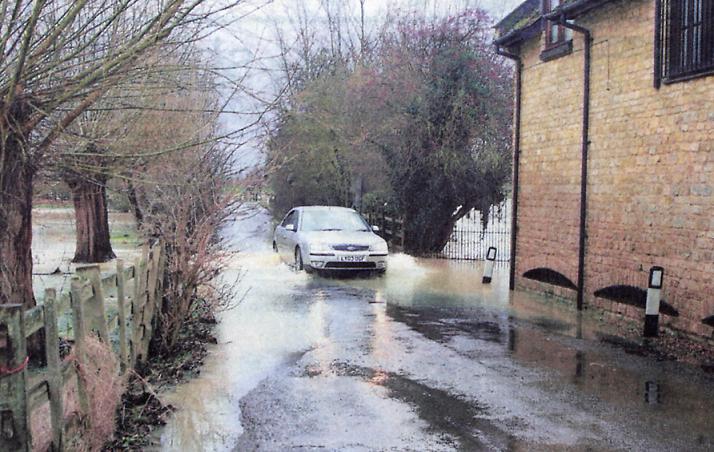 Strong winds batter the county during the morning with gusts reaching 52mph at Pitsford Hall's affiliated site at Brixworth. Little structural damage is reported from across the county, although a lorry is thrown over by the wind on the A43 near Kettering. Police close the road to traffic for an hour around lunchtime. Several trees were uprooted including one blocking the A361 at Fawsley. Trees also cause problems on roads in Moulton, Northampton, Lamport and in Chacombe. The Warwickshire and Northamptonshire air ambulance service is called out twice to attend accidents involving fallen trees. The strong winds are accompanied by torrential downpours of rain resulting in the river Great Ouse bursting its banks at Passenham.

Severe gale batters the county causing widespread disruption, loss of power and structural damage. A peak gust of 65mph is recorded at Pitsford Hall, although gusts exceeding 80mph are reported by the local press. The M1 motorway is closed between junctions 18 and 19 at around 3pm as 6 heavy goods vehicles overturn. Lorries also overturn on the A14 and part of the A45 is closed as gantry signs are blown down. Pupils are kept indoors in schools across the county. Trees are reported as having blown down at Boothville Primary School, Northamptonshire Grammar School and at Abington Park museum narrowly missing the museum assistant. Trains on the West Coast Mainline are suspended as the gale tears down power lines and strews debris across the railway tracks. The gable end of a block of flats in Grange Park is blown off in the gales and numerous homes report structural damage: broken fences, fallen walls and lost roof tiles. Over 80,000 people are left without power as electricity cables succumb to the wind. Trading on the Market Square in Northampton is suspended apart from a few brave souls who persevere despite the conditions. The press reports the gale as being the worst in Britain for 17 years.

Clear skies result in a hard frost overnight across the county. Temperatures fall to as low as -5.8C at Pitsford Hall making this the coldest February night in Northampton since 1991 when temperatures fell to -9.6C. However, this is someway short of the record February minimum in Northampton which was -18.3C in 1895. With an approaching frontal system expected to cross the county overnight on the 7th/8th gritting vehicles remain is a 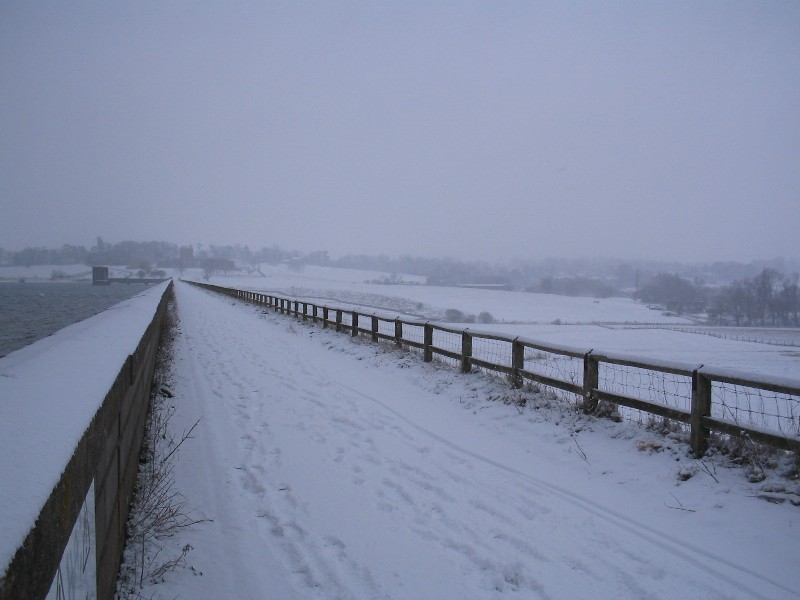 state of readiness against the potential for significant snowfall.

County is gripped by heavy snow. Snow starts falling at Pitsford Hall around 0600hrs continuing through the morning before finally easing off during the afternoon. 7cm of lying snow is recorded at Pitsford at 0900hrs. Few reports are received of major traffic problems across the county, although nearly half of all schools in Northamptonshire close. Silverlink trains are delayed between Northampton and Euston include one breakdown just outside Northampton which left passengers without heat for a time.

Further heavy snow falls across the county during the afternoon.  The snow turns to sleet and eventually rain overnight as a thaw sets in.

Following a thoroughly wet 24 hour period in which 12.4mm of rain is recorded at 0900hrs, there are concerns about flooding across the county. Much of the rain falls on previously waterlogged ground following heavy rain on the 2nd (19.5mm). The Environment Agency confirms that several parts of the Rivers Nene and Great Ouse are under flood watches. Low lying areas between Daventry and Northampton are included within the floodwatch, along with the River Nene between Billing and Thrapston. Fields around Flore and between Church Brampton and Brixworth remain under water as a result of the rain overnight on the 2nd/3rd with football pitches at Spencer and Kingsthorpe reported to be under a foot of water.

With more rain forecast for the county Billing Aquadrome is evacuated amid fears that the River Nene might burst its banks. The Environment Agency issues a severe flood warning for the River Nene in Great Billing, the only such warning issued in the whole of the UK.

Heavy rain and high winds swamp the county resulting in one of the worst Bank Holidays in living memory. The relentless rain causes havoc at the World Superbike races in Silverstone with several high speed crashes taking place before the second race is called off. More than 100 homes in Brixworth go without power on the 28th as an overhead power line crashes down in the storms. Despite the wet conditions the centenary celebrations of Northampton and District Scouts continue with more than 550 scouts attending the event.  By 0900hrs on the 28th 30.8mm of rain had fallen at Pitsford in the previous 24 hours.

A warm and sunny weekend comes to a close with torrential downpours of rain across the county. 15.1mm in recorded in under 6 hours at Pitsford. Stoke Goldingston on the Bucks/Northants border suffers dramatic localised flooding with around 25 homes inundated in less than an hour as the main street is transformed into a river. 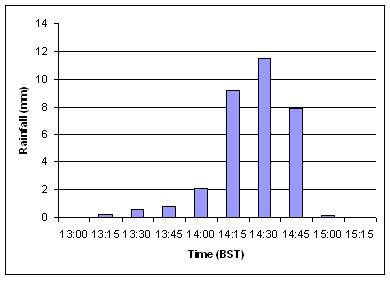 Heavy rainfall causes chaos around Northamptonshire with many roads and buildings flooded by sudden downpours. 30.8mm of rain falls in an hour at Pitsford Hall between 14:00BST and 15:00BST with 11.5mm falling during a torrential downpour between 14:15 and 14:30 BST. Motorists are subjected to gridlock after the downpours force part of Bedford Road in Northampton to lift upwards as underground sewers fail to cope with the volume of water. Several pubs lose stock as flood waters run into cellars. Rainwater rises to waist height within 10 minutes in the basement of the Charles Bradlaugh pub in Upper Mounts, Northampton. The floods threaten to inundate one of Northampton's prized historic houses, the Charles Rennie Mackintosh House at 78 Derngate, with the cellars of neighbouring properties damaged. The heavy rain causes problems in the county's schools. Hunsbury Park Primary School closes as rainwater works into the building through roofs damaged by thieves who earlier stole the lead flashing. Northamptonshire Grammar School, home to Pitsford Hall weather station, closes a classroom block as runoff from the downpours cascades across a car park and through door ways. In the 24 hour period up until 10:00 BST on 15th June 68.8mm of rain is recorded at Pitsford Hall, making this the wettest day since the station's inception in 1998, a total exceeding that recorded during the Easter floods of 9 April 1998 and beating the previous wettest day recorded by Moulton Park climatological station on September 14th 1994.

June ends with the county experiencing the wettest June on record. Just over three times the average June rainfall is recorded at Pitsford Hall (176.1mm). As heavy showers continue into July the village of Stoke Goldingston, just over the county border in Buckinghamshire, is yet again flooded. Over three feet of flood water inundates part of the village representing the second time the village is flooded within a month. The Environment Agency reports that up to 60mm of rain fell over Stoke Goldingston on the 2nd causing many residents to be evacuated. 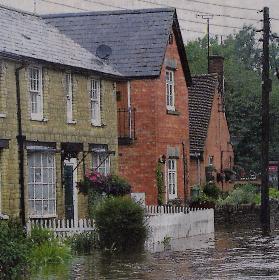 Heavy rain and torrential thundery downpours affect the county. South Northamptonshire is the worst affected area with the villages of Helmdon, Syresham and Silverstone badly hit. Flood waters rise to 4 feet in the space of half an hour. Fire  crews from across the county attend the scene to pump water out of homes and to assist in rescue operations including the evacuation of 60 pupils from Helmdon Primary School. The Environment Agency releases a flood warning for the Great Ouse between Brackley and Thornborough and flood watches for stretches of the Cherwell, upper Nene and Tove. Villagers in Bugbrooke, Nether Heyford and Tiffield are warned to be prepared for flooding. Several events across the county are cancelled including the 3D Masters Helicopter Championship at the University of Northampton and an archaeological dig at Bury Mounts in Towcester. At Pitsford Hall 26.6mm of rain was recorded in the 24 hour period prior to 0900 GMT on the 21st.

Strong winds and heavy rain batter the county in the early morning. An approaching cold front fuels a line squall across the county with reports of funnel clouds and tornadoes. Several buildings are severely damaged in Lumbertubs, Northampton and a bus is struck by a falling tree on the A4500 between Ecton and Earls Barton at around 0700am. Wind speeds at Pitsford Hall peaked at only 36mph at 0715BST emphasing the highly localised nature of the event.

Notable squall recorded at Pitsford Hall between 16:30 and 16:45 GMT with gusts recorded by the automatic weather station increasing to 54mph at 16:33. The neighbouring site at Brixworth (2 miles due north) registers the same phenomenon, but to a lesser extent. The squall at Pitsford was accompanied by rain showers, not recorded at Brixworth.

Another notable line squall works through the county reaching Pitsford just after 14:00 GMT accompanied by heavy showers including hail. Winds peak at 54mph at 14:13 (47 knots) with 4.1mm of rain falling in the half hour before 14:30. A notable feature widely reported is the signficant drop in temperature through the squall, 6C at Pitsford from 13.2C at 14:00 to 7.2C at 14:15.

First snow of the autum/winter season at Pitsford Hall, takes forecasters completely by surprise as it was forecast for higher ground further west. Continuous rain throughout the day changed to snow during the evening as temperatures fell close to freezing. As temperatures rose steadily through the night much of the snow had melted away before dawn averting the potential chaos during rush hour owing to untreated roads.

Strong winds sweep across the county during the early hours with gusts reaching storm force at Pitsford Hall. The anemometer at the station's climate centre recorded a maximum gust of 59mph whilst the automatic weather station noted a speed of 64mph at 06:21GMT. Other than fallen branches there were no reports of significant structural damage. 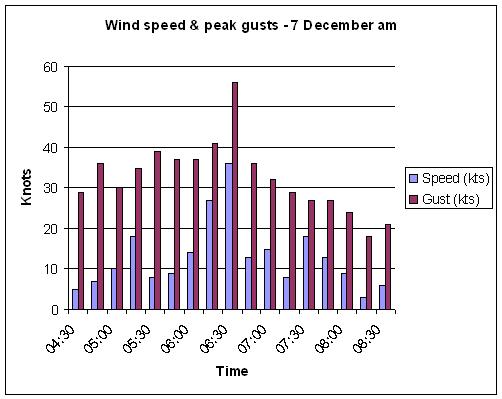