Line squall works south-eastwards through the county during the evening. Heavy rain, strong winds and hail are reported at Pitsford, 3.4mm in the space of 45 minutes recorded by syphoning rainfall recorder. A notable feature of the squall is the drop in temperature from 8C at 21:45 to 3.2C at 22:00. Reports are received of a mini tornado in Rushden*. 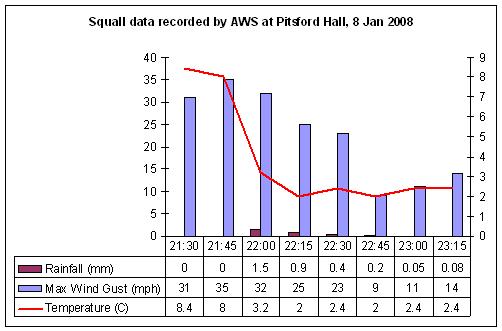 Heavy rain during the evening and overnight into the 16th sees the Environment Agency releasing flood warnings across Northamptonshire. Flood warnings are put in place along the River Ouse from Brackley to Newport Pagnell and flood watches are in effect on the River Ise, Upper Nene and Tove. Residents living in Bugbrooke, Kings Sutton, Kislingbury, Nether Heyford and Tiffield are encouraged to fill sandbags as a precaution. 14mm of rain is recorded over 4 hours at Pitsford Hall.

Strong winds batter the county during the first half of the morning gusting to force 9 (52mph) at Pitsford Hall.  Part of the roof of Duston School in Northampton is damaged in the high winds forcing the 1200 pupils and 180 staff to be sent home owing to concerns over safety on the site. No reports of significant disruption though are received.

Exceptionally mild for the time of year. Temperatures at Pitsford Hall on both the 9th & 10th reach 13.4C prompting a surge in outdoor activities across the county through the weekend. Salcey Forest reports an exceptional number of visitors and ice cream sales beat all previous records in Abington Park. 16.6C is recorded in London on the 9th making this the warmest February 9th for 100 years in the capital.

A very cold day with temperatures struggling to climb above freezing at Pitsford Hall. Extensive mist and fog lingers all day with widespread rime giving a very wintry picture. Reports are received of unusual granular snow in parts of the county.

Notable drop in temperature associated with the passage of a cold front soon after 16:00. No rainfall is recorded at Pitsford until an hour later.

Readings taken by AWS at Pitsford Hall on 24th.

Not weather-related but worth reporting - earthquake is felt across the county at around 01:00 causing significant shaking of buildings. No significant damage is reported. The earthquake which measured 5.3 on the Richter scale had its epicentre near Market Rasen in Lincolnshire and was the most signifcant earthquake in the UK for 25 years. The weather station has previously picked up earthquakes through interupted barograph and thermograph traces caused by the strong vibrations. However, nothing can be noted on this occasion.

Strong winds and heavy rain work across the county during the early morning associated with a deep low. The county escapes the severe gales experienced in areas further south and west. However sea level pressure at Pitsford falls to 958.9mb by 15:00 making this the lowest pressure recorded since observations began in 1998 and the second lowest pressure recorded since the Great Storm of 16th October 1987.

Continuous rainfall, heavy at times, leads to localised flooding across parts of the county. 60.1mm is recorded in Raunds* between 0900 on 15th and 0900 on 16th, the wettest day here since 9th August 2004. 1.2m of standing water is recorded at the lowest point in the town near to the River Nene. Northampton Fire and Rescue assist with the evacuation of several properties. Standing water also affects roads in Silverstone, Blisworth, Staverton and Walgrave. However, the rainfall appears to be highly variable with only 25.7mm recorded over the same interval at Pitsford.

County records a white Easter. Snowfall during the early morning produces a covering of 6cm at Pitsford Hall by 09:00. Rising temperatures though result in a fairly rapid thaw although further flurries of snow and hail are recorded during the day.

Heavy fall of snow in the early hours resulting in 5cm of lying snow at Pitsford at 09:00 GMT. The snow quickly thaws in the strong morning sunshine.

Anglian Water issues boil notices to 100 000 households across Northamptonshire following cryptosporidium contamination at Pitsford Water Treatment Works. Some previous cryptosporidium outbreaks in other parts of the UK suggest a link with weather conditions - damp cloudy conditions favouring survival of the parasite in the catchment before being flushed by runoff into neighbouring reservoirs following heavy rain. Similar conditions were observed, but there is no proof that this contributed to the contamination at Pitsford. An independent report examining the relationship between cryptosporidium and weather is contained in the July 2008 Monthly Weather Report.

Prolonged and at times heavy rain falls throughout the county. 12.6mm is recorded at Pitsford Hall in the 24hrs leading up to 09:00GMT on the 10th. Reports are received of rain damage to ripening soft fruit, especially strawberries.

Frequent heavy showers during the day result in reduced visibility and difficult driving conditions across the county. 14.0mm is recorded as falling in just under 5 hours at Pitsford Hall. 4.6mm falls within 15 minutes during an exceptionally heavy shower around 17:30 BST (recorded by AWS).

Anglian Water announce that the source of the cryptosporidium outbreak is an infected rabbit found inside one of the tanks at Pitsford Water Treatment Works. How the rabbit entered the tank is unclear, although barriers were in place to guard against minute insect entry.

Downpours during the evening and overnight leave hundreds of residents and their homes at risk from flooding. Homes in Far Cotton, Northampton, bear the worse of the rain with fire crews being called out to inspect buildings and drains filling with water. At the peak of the storms in Pitsford, nearly 2mm of rain falls in 15 minutes just before 21:00 BST.

Torrential rain affects much of the county during the morning. Visibilities on roads are severely reduced by spray and drains fail to cope with the excess water. 24.7mm of rain is recorded at Pitsford over the 24 hour period leading up to 09:00 GMT. At Pitsford, the heaviest of the rain falls between 06:45 and 07:30 GMT when 10.6mm is recorded by the automatic weather station. 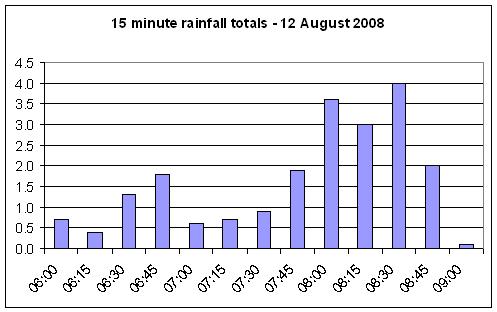 Very localised thunderstorms and torrential rain are reported from across the county. 16.2mm falls between 15:20 and 16:20 BST at Collingtree Park whereas only 0.1mm is recorded at Pitsford Hall in the 24 hour period up until 10:00 BST on 15th. Thunderstorms are also reported at Little Addington, but not observed or detected at Pitsford.

Thunderstorms work through the county during the early evening delivering torrential downpours of rain and hail across many areas. 3.8mm of rain falls at Pitsford Hall between 18:45 and 19:00 BST. A tornado, or more correctly a funnel cloud, is reported by an eyewitness over Northampton around 19:10 BST. 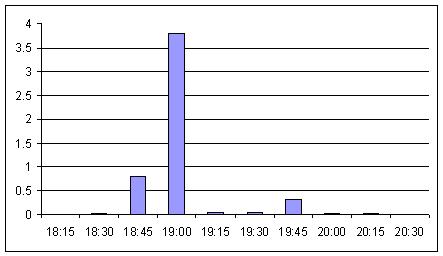 Rainfall recorded at Pitsford Hall during the evening of 2nd September and image of the funnel cloud recorded over Northampton.

Prolonged and at times heavy rain throughout the day sees a total of 32.7mm recorded over the 24 hour period ending at 10:00 BST on 7th. Northamptonshire Fire and Rescue receive 35 calls from the general public concerned about rising water levels. Southfields, Goldings, Thorplands, Lumbertubs and Abington are among areas worst affected where emergency measures are taken to divert water. Several roads are also closed to protect motorists. Bedford Road is closed after 20:00 BST as the River Nene rose above the level of local storm drains. Sandbags are also handed out to residents in Hartwell and Roade. In total 5 rescue teams are involved in the emergency operation from Northampton to Wellingborough.

Snow falls for the first time in October since 1934. As daytime maxima only reach 6.8C at Pitsford, outbreaks of rain during the afternoon and evening turn increasingly to sleet and snow as temperatures fall. A thin covering of snow is reported in many parts of Northamptonshire, including Northampton. However, all traces of snow disappear by 0900GMT on 29th.

The county escapes serious flooding following two days of heavy rain. 16.5mm of rain is recorded in the 24 hour period up to 0900 GMT on the 10th with a further 8.9mm recorded over the same period until 0900 GMT on the 11th. Some particularly heavy downpours are experienced during the evening of the 10th when a total of 5.0mm is recorded over 15 minutes at Brixworth. Strong winds also accompany the rain with gusts reaching 44mph on the 9th at Pitsford. Northamptonshire Fire and Rescue is called out to several properties and standing water causes some problems on roads. No flood warnings are issued by the Environment Agency. 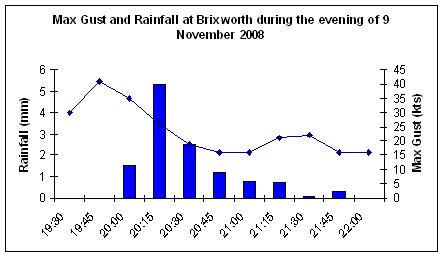 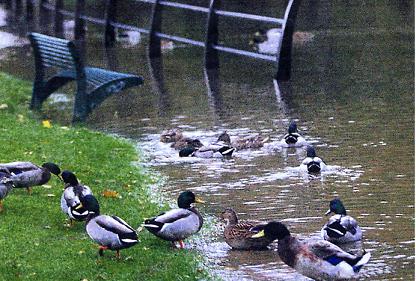 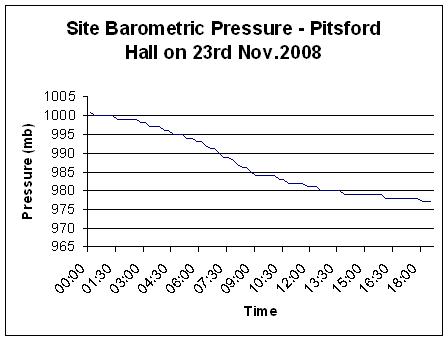 Whilst a large part of the country experiences blizzard conditions during the early morning, Northamptonshire is dealt a spell of driving rain and strong winds. Between 0400 and 1000GMT 11.5mm of rain is recorded at Brixworth, substantially more than is recorded at Pitsford Hall owing to its more exposed position. Winds at Brixworth reach 48mph (42 kts) at 06:37 GMT, the automatic weather station at Pitsford Hall recording 53mph (46 kts) shortly before at 06:31. The rain quickly clears to sunshine by mid morning with the wind gradually easing through the day. 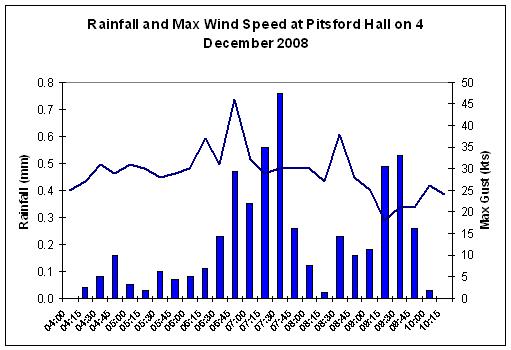