Temperatures at Pitsford Hall overnight on the 5th into the 6th fall to -5.5C making this the coldest January night since -7.0C was recorded on 4th January 2002. Some parts of the county record even lower temperatures including Thrapston with an air minimum of -7.1C. Dozens of people are admitted to A & E at Northampton General Hospital having fallen on the ice on untreated surfaces. 12 car accidents are reported on the county's roads. 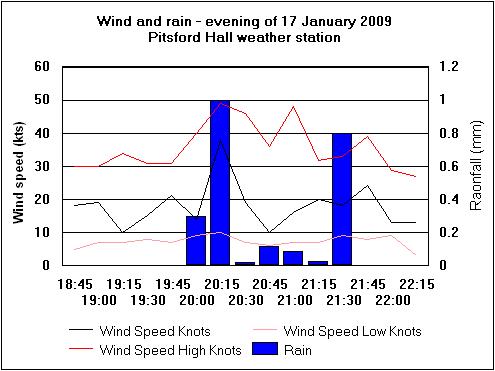 Strong winds and spells of heavy rain affect much of the county as a deep low tracks past the north of Scotland. Although there are no reports of structural damage, winds gust to in excess of 50mph across many areas.

Continual snow showers across the county cause disruption. Initial snow showers overnight and during the morning remain light in contrast to significantly heavier falls elsewhere. However, more substantial snow arrives during the afternoon forcing the closure of a number of schools. The snow caused the cancellation of rubbish collections across South Northamptonshire district and additional calls to the East Midlands Ambulance Service from members of the public slipping and falling over in the icy conditions. The entire fleet of the county's gritters were on the roads by the evening as temperatures fell sharply resulting in treacherous stretches on many roads. 7cm of lying snow is recorded at Pitsford at 0900hrs on the 3rd. 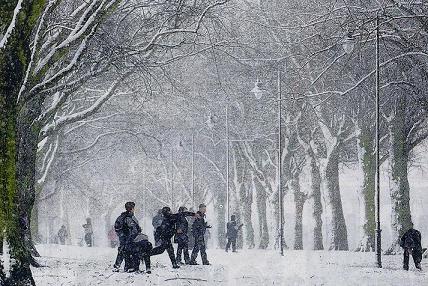 Children enjoying an unexpected day off school due to heavy snow on 2nd February.

Further heavy falls of snow overnight into the 5th cause widespread disruption to transport across the county. Most minor roads and country lanes are impassable with only main roads accessible with caution. The westbound carriageway of the A14 is closed at Catthorpe and several jack-knifed lorries cause problems on the M1 closing the northbound carriageway for a time. Other major routes are blocked by stuck lorries.  All rural bus services are suspended including those in Wellingborough and Corby. Bus services in Northampton are severely restricted. Northampton General Hospital cancels all routine operations as medical staff struggle to get into work. Disruption is also caused to rail services through Northampton. 15.0cm of lying snow is recorded at Pitsford Hall at 0900 GMT, certainly the heaviest snow event recorded by the weather station in its 10 year history. Around 200 schools in the county close rewarding children with more sledging opportunities. 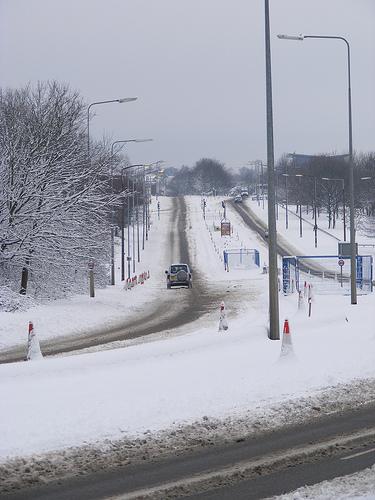 Further heavy snow brings traffic chaos across Northamptonshire during the morning. The snow adds to the 13.0cm of lying snow at Pitsford at 0900. Several major routes throughout the county are left paralysed. Drivers are forced to abandon their vehicles and many isolated rural villages are cut off for a time. The M1 is closed during the heaviest of the snow showers and long tail backs occur on the A43, A45 and A14. Extra fire crews are sent to emergency call outs across the county to counteract the treacherous road conditions. During the worst of the conditions the Police record up to 45 shunts per hour. Plummetting temperatures overnight into the 7th cause another set of problems as ice becomes widespread even on treated roads. Pitsford Hall records a low of -4.7C with 17.0cm of lying snow at 0900. In Northampton, recycling collections are disrupted and the council abandons plans to collect rubbish for at least 2 weeks. Many council run facilities including leisure centres and museums close and trials at Northampton Crown Court are adjourned. 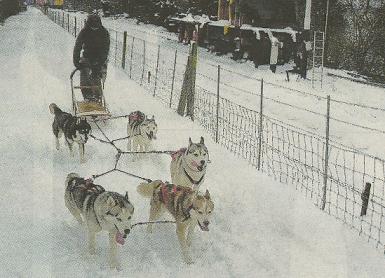 For many parts of rural Northamptonshire, improvising appropriate transport becomes a necessity following yet further heavy snow on 6 February. 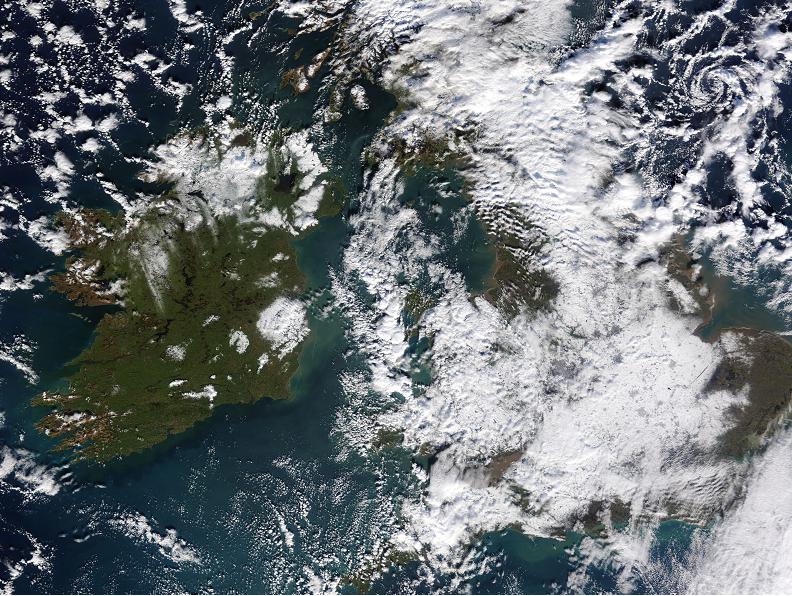 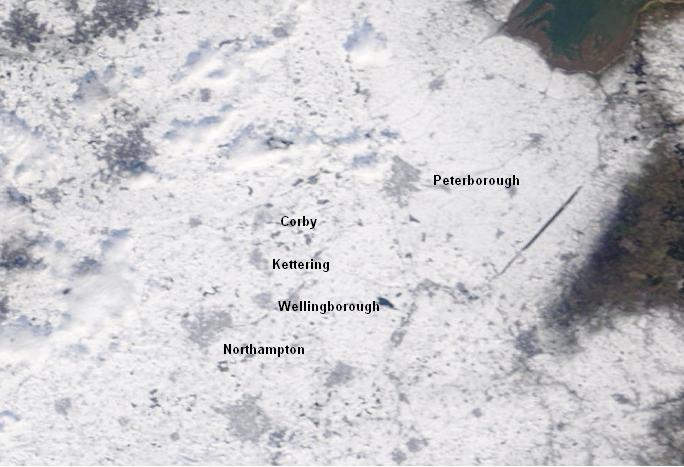 Satellite images showing the extent of the snowfield across England and Wales (left) and Northamptonshire (right). Click on images to see larger view.

Heavy falls of snow occur during the evening of the 8th resulting in treacherous conditions on untreated roads across the county the following morning.  Roads which had become clear following a slow thaw during the day ice over making driving extremely hazardous. Rain later in the day on the 9th turns increasing to sleet and snow during the evening. Together with the strengthening wind some exposed parts of the county report blizzard conditions. The protracted cold spell is beginning to impact on businesses and shopkeepers in Abington Street and St Giles Street in Northampton report a marked downturn in trade owing customers avoiding the icy pavements. Recycling collections continue to be disrupted as councils concentrate on grey bin waste. The combination of rain and snow results in a 24 hour total of 20.9mm being recorded at Pitsford at 0900 on the 10th.

Residents of towns and villages in Northamptonshire are told to remain vigilant against the possible risk of flooding after the River Great Ouse bursts its banks swollen with rainwater and snowmelt. The Environment Agency releases a flood warning for parts of Brackley and the River Tove in Towcester. Black ice causes problems on several roads including the A43 which was closed until the road was re-gritted. Several minor accidents are reported on the county's roads overnight around Towcester and the villages of Litchborough, Crick and Welford.

Black ice results in treacherous conditions on the roads across many parts of Northamptonshire, particularly Daventry district. The road between West Haddon and Long Buckby is closed for 17 hours following an accident. Many roads, including some major routes, go without salting.

16 consecutive days with lying snow (covering more than 50% of the ground) come to an end as afternoon temperatures climb to 10.6C at Pitsford Hall. This represents the greatest number of days of lying snow ever recorded by the station at Pitsford, an even more remarkable record as it relates to one single period. Only 2001 came close with 14 days of lying snow, although spread between January, February, March and December.

Freak hailstorms coupled with thunder reported in parts of the county*.

Very warm and humid spell of weather since the 25th peaks with the warmest June day in Northampton since the heatwave of 2006 when 35.5C was recorded. 30.0C is also recorded on 1st July. The heatwave finally breaks down on 3rd July.

Heavy and thundery showers during the afternoon result in problems associated with reduced visibility on fast routes across the county and localised flooding. Severe hailstorms are reported from some localities.

The driest September in Northampton since 1959. Only 14.3mm is recorded throughout the entire month, around a quarter of the expected rainfall. No significant rainfall (0.2mm or more) is recorded at Pitsford since 3rd September.

Heavy fall of snow overnight causes disruption across the county. More than 100 schools break up early for the Christmas holidays and traffic on the A14 grinds to halt for a time as motorists get stuck in snowdrifts or are involved in minor collisions. Lorries on the A509 between Wellingborough and Kettering are unable to negotiate the steep incline. London Midland closes all rail services between London and Northampton due to problems with the track. Up to 6.0cm of snow is recorded at Pitsford Hall at 0900 GMT.

With daytime temperatures around freezing or just above and overnight temperatures falling typically to around -6C, snow continues to lie heavily across the county. The limited thaw during the day only adding to the difficulties on minor routes overnight as ice forms. Fresh snow showers on the evening of the 21st result in a picturesque scene across much of the county. Although main routes are free-flowing, the added snow compounds the hazard for country lanes. 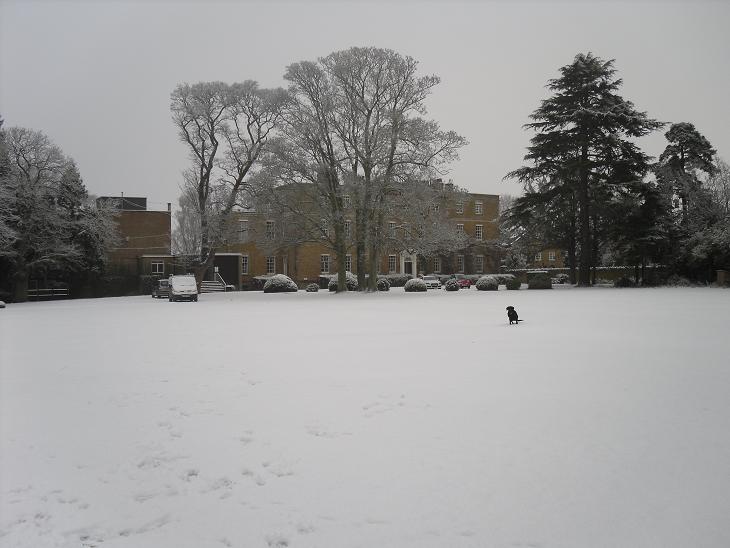