The prolonged cold spell continues as fresh snow falls across the county. Snow tied into low pressure to the south-west brings significant accumulations to south Northamptonshire overnight on the 5th into the 6th, whereas other parts of the county are affected by snow showers during the morning of the 6th some of which are heavy. Scores of schools close, some part-way through the morning as heavier falls of snow arrive. Significant variations in the amount of snow result from parts of the county being affected by two separate weather systems - one moving up from the south tied into low pressure over central southern England, the other more linked to a stream of showers working south-east off the North Sea. 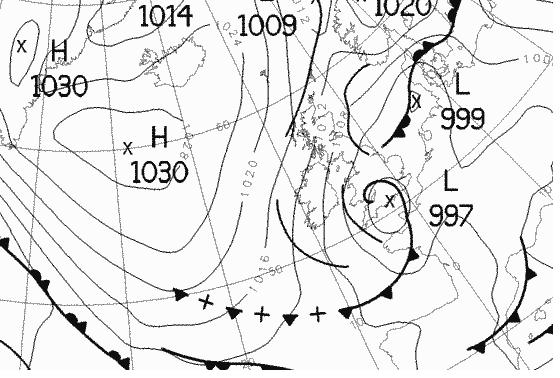 Analysis chart for 0000hrs on 6 January 2010. High pressure south of Iceland maintains the run of cold north or north-easterly air across the UK responsible for the protracted cold spell lasting since mid-December 2009. The county is seen caught between two weather systems to the south and north-east which accounted for the variable nature of the snowfall event on between the 5th and 6th January. The movement of the system over the North Sea was poorly forecast and brought significantly more snow inland than was expected.

The cold snap, now dubbed 'The Big Freeze' by the media continues. Temperatures overnight at Pitsford drop to -6.6C, although in neighbouring Oxfordshire Benson, a well-known frost pocket,  sees an overnight low of -17C. Ice presents a serious hazard across the county and many schools are forced to close. Click on the image opposite to see the extent of snow coverage across the UK.

The Big Freeze continues. Snow fall is recorded everyday from the 8th to the 11th, mainly as light flurries but a moderate fall overnight into the 11th results in 3cm accumulation and a renewal of the earlier snow cover which had been melting away during some sunny spells in the daytime. Snow on the 11th sees the introduction of slighty less cold air from mainland Europe with lows overnight holding up just above freezing - the first night without an air frost since 31st December. However, cold continues as the daytime high rises to just 1.9C at Pitsford some 5 degrees below the expected value of mid January. The county estimates the cost of repairing the county's roads due to frost damage to be around £5 million. During the cold spell, 2 people die after falling through thin ice on lakes and an elderly couple in Northampton fall tragically victim to the cold in their own home.

Frozen lakes present a serious hazard across Northampton, claiming the lives of two people during the 'Big Freeze'.

Fresh falls of snow across Northamptonshire cause traffic chaos as the snow falls on already icy surfaces during the night, continuing through the morning and into the afternoon. The south of the county receives the heaviest of the snow forcing gritting teams to spread salt and clear roads twice during the night. Major problems are reported on the A5, the A45, the A508 and the A43. People living in Wootton Fields are forced to abandon their cars and walk to work due to the treacherous conditions. Numerous schools are also forced to close.

Outbreaks of rain bring to an end a protracted spell of hot weather across Northamptonshire. With the exception of the 1st and 2nd, no significant rainfall has been recorded at Pitsford since the start of the month. Most days record temperatures in the low to mid 20s, with the 8th and 9th being particularly warm at 28.3C and 27.0C respectively. The heat of the 8th triggers the issuing of a Heat-Health warning from the Met Office. The dry conditions in July follow on from the driest first six months of the year since 1926. Water rationing is imposed in parts of the North-West, although this region's dependence on plentiful groundwater supplies rather than surface runoff ensures that the taps keep flowing.

The Met Office issue a severe weather warning for central and southern England including Northamptonshire following heavy rainfall on the 22nd which saw 34.5mm being recorded in just over 8 hours at Pitsford. The heavy rain resulted in localised flooding.

The county continues to endure further spells of heavy rain. Rain falls continuously, heavy at times, from mid afternoon on the 25th finally easing in the early hours of the 27th. A total of 42.6mm of rain is recorded during this period, over 80% of the normal rainfall for August.

The month comes to an end as the wettest August in Northampton since 1917. 141.5mm of rain fell during the month making this the third wettest August on record after 1912 (165.4mm) and 1917 (152.2mm). Following below average rainfall in June and July, the exceptional rainfall in August made the summer wetter than average. 194.7mm of rainfall was recorded at Pitsford compared with the usual 160.1mm. Unsurprisingly, the month was cooler than usual with less the expected amount of sunshine. For a full report on the weather in August 2010, click on here.

The beginning of a particularly wet and windy spell of weather across Northamptonshire as low pressure deepens to the north-west. Barometric pressure at Pitsford is recorded as 971.7mb at 0900 GMT on 8th and a slow moving frontal system introduces 15.0mm of rain over 9.6 hrs. Winds remain strong from the 8th through to the 11th with gusts exceeding 30mph on the 8th, 9th and 10th and rising still further on the 11th to 48mph in the wake of the low as it tracks eastwards. The strong wind rapidly strips the fine autumnal colour display from trees bringing down branches but causing little structural damage. 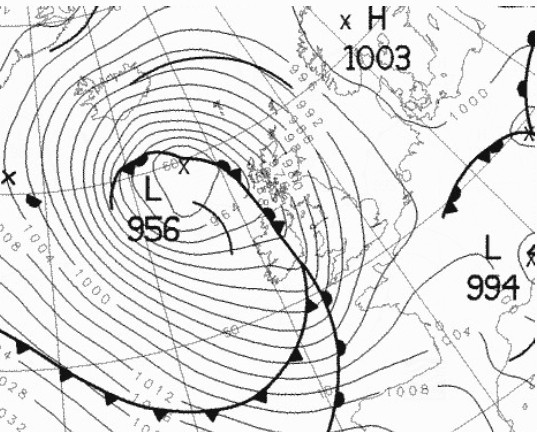 Analysis chart for 0000hrs on 8 November 2010 showing the deep low developing the north-west of the British Isles and which brought a prolonged period of wet and windy weather across the county.

An overnight minimum of -6.6C is recorded at Pitsford making this the coldest November morning since November 1987 when -6.8C was recorded. This low follows a protracted cold spell of weather ushered in as high pressure extends south from Iceland blocking the usual run of Atlantic lows. Many parts of the country see significant falls of snow, but the county so far escapes with little more than light flurries.

First significant snowfall event of the current cold spell is recorded at Pitsford with 2cm of snow lying at 0900GMT. The county is one of the last parts of the UK not to record lying snow prior to the overnight showers.

Coldest December morning in Northampton since 1991. An air minimum of -9.4C is recorded at Pitsford Hall with even lower temperatures recorded elsewhere in the county, for example -11.C at Kettering*. Temperatures remain below zero throughout the day maintaining a picturesque rime-filled landscape produced during freezing fog conditions on the 6th. The following pictures were taken around the grounds of Northamptonshire Grammar School which resembled a scene from Narnia. Click on the images to enlarge.

The county experiences a dramatic change in the weather as a cold front sweeps southwards marked notably by a 11C difference in temperature in 18 hours. The day begins with a relatively mild south-westerly airstream and temperatures climbing to 6.8C by 08:45. During the afternoon the county is plunged into cold Arctic air and temperatures correspondingly plummet to freezing by 16:00. Rain during the morning also turns firstly to sleet and then snow. As the cloud associated with the front clears southwards overnight, temperatures fall still further reaching a low of -4.4C by 02:30 on the 17th. 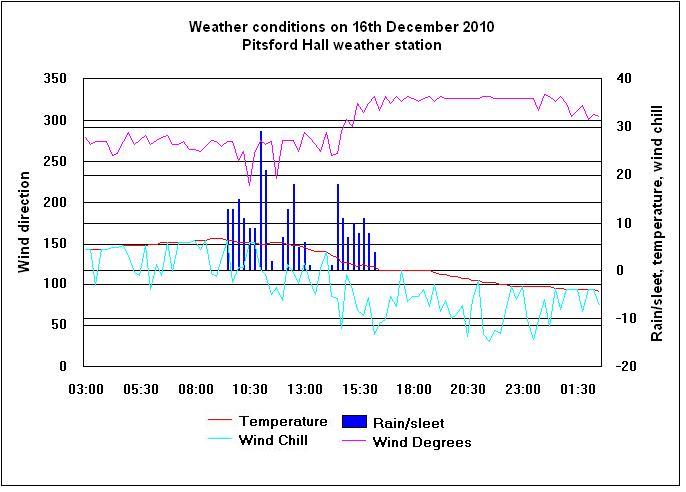 First heavy snowfall of the winter season causes widespread problems for morning traffic across the county. Northampton experiences severe disruption with several roads closed including the A45 to enable gritting vehicles to get through. Grendon is marooned for a time as motorists struggle to leave the village. 7.0cm of lying snow is recorded at Pitsford at 0900 hrs. So far during the exceptionally cold weather which has persisted since November, the county has escaped the significant snowfalls experienced elsewhere in the country. However, the snow finally cought up with Northampton during the early hours.