Following the driest Spring in Northampton since 1938 and with just 3.1mm of rain recorded so far this month, the Environment Agency and Defra declare an official 'drought' for Northamptonshire. With reservoirs in the county around 90% full, there is no imminent danger of hose pipe bans or restrictions on domestic and industrial uses. However, the county's farmers face restrictions on use of water taken for irrigation. In the three months March, April and May, Pitsford recorded just 48.9mm of rain,  32% of the expected Spring total. March and April were particularly dry with just 4.8mm and 7.4mm recorded in each respective month. Only the Spring of 1938 recorded less rainfall in Northampton, just 44.7mm. 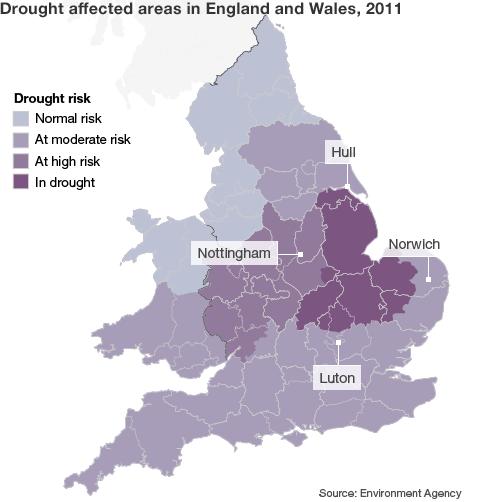 Press Release: Temperatures in Northampton rocket with 29.4C recorded at Pitsford Hall weather station, making this the warmest day of the year so far. However, the heat falls short of the warmest June day on record in Northampton, 34.0C in 1976. Following a very warm day on the 26th, lows overnight fall no lower than 15.7C and already reach 20.0C by 07:15 BST Despite the high humidity during the day, the county escapes the thundery downpours forecast for many areas.

Press Release: June was a pretty average month temperature-wise in Northampton with a mean temperature of 14.6C, just 0.3C above what we would have expected. There were some notably warm days such as the 27th recording a high of 29.4C following a very close night when temperatures dropped no lower than 15.7C. However, the average daytime maximum was a pleasantly warm 19.7C with an average low of 9.5C making nights generally comfortable for sleeping.

Rainfall, on the other hand, remained below average. A total of 35.1mm fell at Pitsford, 64.3% of the average, giving little prospect of an imminent end to the official drought which was declared by the Environment Agency and Defra on 10th June. Last Spring was the driest in Northampton since 1938, but the sixth month period from January to June was also the driest since 1976. The total of over the six months was 174.9mm compared to 141mm in 1976.

Sunshine amounts were down in June, with 168hrs representing 88% of the usual amount. The sunniest day was the 26th with 11.7hrs.

Press Release: Statistically, July ended up as one of the 10 coolest July's on record in Northampton. With the overall mean temperature at 15.7C, 1.1C below the norm for July. July 2007 was a touch cooler at 15.6C, but then we have to look to July 1996 as being cooler still with an average of 15.5C. The coolest July ever recorded in Northampton actually occurred not that long ago, with an average of 14.0C in 1993.

Unsurprisingly, maximum temperatures were modest for July. The warmest day was the 28th with a high of 25.4C. In fact, some overnight temperatures were decidely chilly such as the morning of the 5th when lows fell to 4.5C, the coolest July night since 1993 when temperatures fell to 3.8C.

In terms of rainfall, there was nothing in July's figures to suggest we are any where near recouping the current deficit. A total of 47.4mm of rain fell during the month and whilst this represents the largest amount recorded since February, so far only 222.4mm of rain has fallen this year, 109.2mm short of what we should have expected, in other words we are down by about 2 months of rain.

Finally, July was also a little short on sunshine. A total of 136.7 hours of sunshine was recorded, around 63% of what we should have seen. 5 days actually saw no sunshine at all.

A warm and humid day ends with storms breaking out across the county. Torrential downpours track north-eastwards through the county causing localised flooding in parts of Corby. Gainsborough Road in the town is closed due to the flooding in order to prevent damage and disruption to nearby houses.

Press Release: Whereas July was a cool month in Northampton, more than 1C below average, August came in closer to the long term average with temperatures just 0.2C short of the average. The warmest day was recorded early on in the month: 28.2C on the 3rd, with some significantly cool days experienced towards the end. Temperatures on the 26th only reached 14.4C and on the 29th only 14.9C. Rainfall across the eastern region was extremely variable during August, although in Northampton we still fell short of the average with 41.3mm representing 79.3% of the usual total. By contrast in Thrapston over 69mm of rain fell. Some particularly dull and cloudy days during the final week saw August falling short of the total amount of bright sunshine. 133.6hrs were recorded in total, just 63.5% of the expected amount. August also brings to an end a fairly dull and cool summer. Statistics show that this summer (the months of June, July and August combined) temperatures were 0.8C below average, sunshine totals were down by 65.9hrs and the rainfall total of 123.8mm was 77.3% of what it should have been. Of more concern is that the deficit of rainfall in 2011 continues. So far this year we have only recorded 263.7mm, some way short of the 415mm we should have recorded by now. In other words, we have over 3 months worth of rain to catch up on to balance the books.

Daytime temperatures climb to the mid to high 20s as a small heatwave grips the county. High pressure over central Europe brings in a plume of warm air from the Mediterranean.

The 'Indian summer' continues with temperatures climbing to 27.0C on the 2nd and 25.0C on the 3rd. The warm weather is brought to a halt on the 3rd as a cold front moves down from the north.

Press Release: Unlike November last year, this November was noticeably mild. With overall temperatures averaging at 9.4C and with only one slight air frost on the 28th, this was the mildest November since 1999 with temperatures 2.5C warmer than expected. Considering the 3 months together - September, October and November - this has been the mildest autumn since 2006.

However, rainfall continues to be worryingly short of the mark. A total of 33.5mm of rain fell in November, less than 68% of the expected total, and with only one more month to go in 2011, annual rainfall still only stands at 352.1mm - 58.6% of the expected amount. Although not breaking the record for the driest year in Northampton, which was 1921 with only 347.2mm, it is likely to become the second driest even with above average rainfall in December. Seasonally, this autumn has been the driest since 1978.