Gale force winds batter the county with periods of heavy rain and hail during the course of the morning. The strong winds ease slighly during the afternoon, but pick up again during the evening. The maximum gust recorded at Pitsford is 51mph. No reports of disruption are received from across the county, although some fast routes are closed temporarily beyond the county. 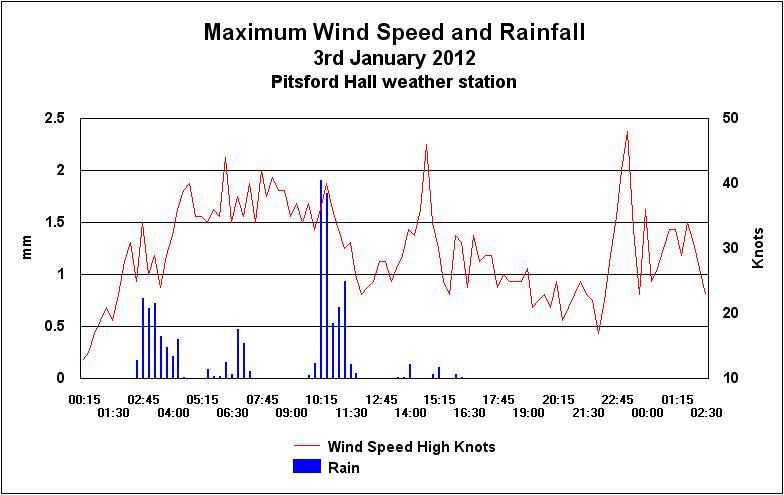 Maximum wind speed and rainfall recorded on 3rd January. Note - the archive interval for maximum gusts and rainfall is 15 mins.

Strong winds once more batter the county, causing disruption on the roads with many fallen trees and branches. The police deal with 30 incidents of trees blocking roads during the morning. A woman escapes with minor injuries when a tree falls on to her car in a supermarket car park in Wellingborough. Dozens of panels of security fencing is blown across the Grafton Industrial Estate in Northampton and the road between Greens Norton and Blakesley is closed following an accident.

The county wakes to the coldest February morning since 1986 and the second coldest since 1917. A low of -13.0C is recorded at Pitsford with freezing fog and rime creating a classical winter landscape. Previous record lows include -15.4C recorded in February of 1986 and -13.8C recorded in February 1917. 10cm of snow continues to lie on the ground at 0900hrs, following a significant fall of snow on the evening of the 9th. 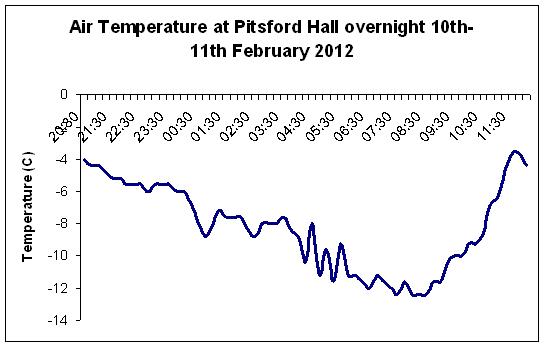 Prolonged and, at times, heavy rain falls across the county culminating in flood alerts being issued on rivers across the county. 19.7mm of rain is recorded at Pitsford Hall over the 48 hour period ending 0900GMT on 29th. Accidents are reported on roads including incidents due to poor visibility and cars aquaplaning. Isebrook Reservoir is forced to release additional water into a local river, despite the county still being in drought conditions and with a hosepipe ban in force. Billing Aquadrome in Northampton is evacuated as a safety precaution against rising floodwaters on the River Nene.The rain on the 29th is also accompanied by strong winds, gusting to 52mph at Pitsford.

Anglian Water lifts the hosepipe ban which has been in existence in Northamptonshire as annual rainfall across Northamptonshire for 2012 approaches near normal for the first six months of the year following an exceptionally wet April and continuing wet weather through May and June.. 24 hour rainfall totals exceeding 12mm have already been recorded on 4 separate occasions since this month. The River Tove has been on flood alert since 12th June.

The county narrowly escapes some of the worst summer storms for 30 years. Leicestershire sees some of thw worst effects: buildings and roads are flooded, windows smashed by giant hailstones and lightning damages homes and businesses. Lightning activity was picked up by the detector at Pitsford Hall which tracked the movement of 7 intense thunderstorms north-eastwards towards Leicestershire. The peak strike rate of 85 strikes per minute is recorded at 11:06. The Foxton Locks Festival, the Market Bosworth Country Show, the Birstall Gala and Leicester's Race for Life are all postponed or cancelled. Warkwickshire is also deluged forcing the cancellation of the Godiva music festival. In contrast, no rainfall is recorded at all at Pitsford Hall in the 24 hours beginning at 0900 GMT on the 28th. 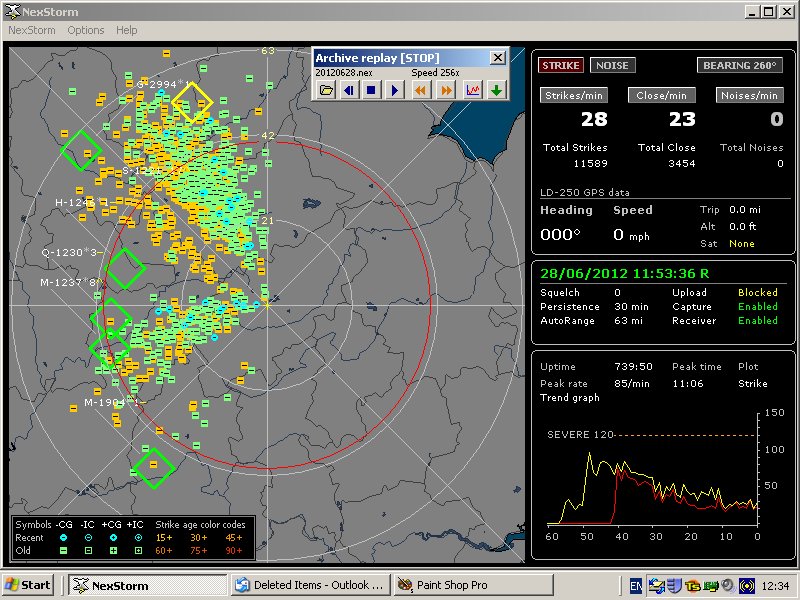 Screenshot of the lightning detector display at Pitsford Hall showing thunderstorm activity to north and east of the county on 28th June 2012. Click on the image to enlarge into a new window.

Press Release: More than twice the usual amount of rainfall fell in in June. With a total of 123.9mm representing 231.2% of the usual June rainfall, this was the wettest June in since 2007 when a total of 176.1mm was recorded. Despite the first 3 months of the year coming in with below average rainfall, prompting Anglian Water to introduce a hosepipe ban, an exceptionally wet April and June has resulted in rainfall for the first 6 months of the year now being above average. A total of 369mm has so far been recorded at Pitsford representing the wettest first half of the year since 2007.

There were some exceptionally wet days in June. 5 days recorded over 10mm of rain and 3 days recorded 24 hour totals of over 15mm. However, the wettest day (18.0mm) was on the 2nd. The 28th, which saw severe thunderstorms and giant hail in parts of the , was comparatively dry in the county. Although the lightning detector at Pitsford recorded in excess of 85 strikes per minute at the peak of the storm, not a drop of rain was recorded locally.

Finally, the lack of sunshine was another feature of the month. With the ever present threat from rain-bearing clouds, June only recorded 100.1hrs of bright sunshine, just 59.9% of the usual amount, making this the dullest June since 1990.

Heavy rain results in waterlogging of the car parks at the British Grand Prix in Silverstone. 20,000 people are turned away from the qualifiying session as organisers try give the car parks time to dry out in time for the main competition.

Thunderstorms accompanied by torrential downpours of rain work across the county during the early afternoon. The downpours cause shops to be flooded in Northampton town centre. 16.1mm of rain is recorded over the 24 hours ending 0900GMT on 16th, most of which fell during the 15 minutes before 1300GMT.

24.2mm of rainfall is recorded in the space of 7.0hrs at Pitsford Hall overnight on the 17th into the 18th, most falling during a torrential downpour between 00:15 and 00:45 BST. 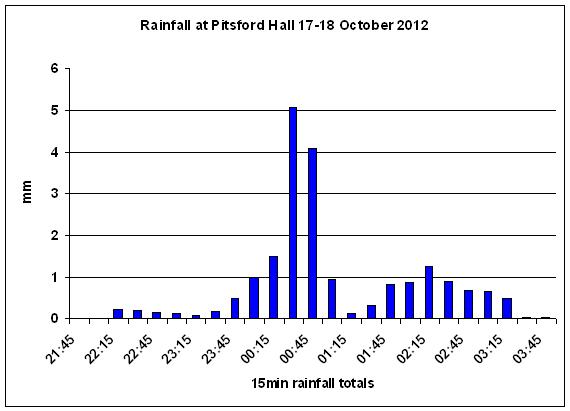 Prolonged rainfall causes widespread flooding on tributaries of the River Nene. 40.6mm of rain is recorded at Pitsford over the 3 day period.

Press Release: COUNTY WEATHER GOES FROM ONE EXTREME TO THE OTHER

The weather in the county this time last year couldn't be more different to what it is now. As we approached the end of November in 2011, the county had only stacked up 352.1mm of rain (58.6% of the average) causing serious concern about diminishing water reserves. The situation did not improve as we moved into the new year. The months of January, February and March all came in with below average rainfall, in fact only 17.2mm and 17.8mm were recorded in February and March (less than half of the expected monthly totals). However, following 6 months of above average rainfall this year, the county rainfall record currently stands at 749.0mm (113.7% of the average).

June 2011 saw the start of the hosepipe ban across the Anglian region. However, June this year has so far been the wettest month with 123.9mm of rain recorded (231.2% of the average). So far this month we have seen 78.2mm, most of which - 40.6mm - has fallen over the past few days Tuesday, Wednesday and Thursday.

With a further spell of wet and windy weather expected to move up from the south-west over the weekend, we could be heading for the wettest November since 2009. Overall, this has already been the wettest year in Northampton since 2007.

6 flood warnings come into force in Northamptonshire on 24th following continued heavy rain. 30.5mm of rain is recorded at Pitsford over 18.0hrs. The rain falls on ground already saturated following prolonged rain a few days earlier. Over the next few days, flooding is widespread across the county. Flooding on the Nene at Kingsthorpe Mill damages the Northampton Spencer FC’s clubhouse. Residents at Billing Aquadrome are evacuated for the second time this year. Cogenhoe Mill caravan site is also inundated. Flooded businesses include the Woodford Mill tea rooms at Great Addington. 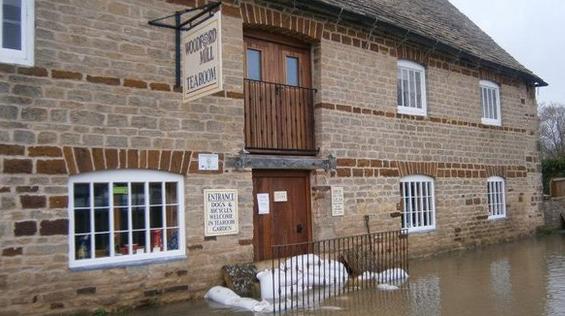 2012 ends as the wettest year on record in Northampton. A total of 882.8mm of rain is recorded over the year at Pitsford (up until 0900GMT on January 1st 2013), exceeding the previous record of 874.3mm established in 1992. The year also registers with mean temperatures below average, and with a mean average temperature of 9.9C, is comparable with the cold years of the early 1940s, but not as cold as 1962 and 1963, both years straddling the coldest winter on record. Then the average temperature fell to 8.8C and 8.7C respectively.