The first significant snowfall of the 2012-2013 winter season arrives in the county in the early hours of the morning. 3.0cm of lying snow is recorded at Pitsford at 0900hrs. Snow flurries continue through the morning, becoming heavier for a time during the early afternoon. Little disruption is recorded across the county and the snow struggles to settle in the towns. The snow clears the county during the late afternoon to leave some hazy sunshine. 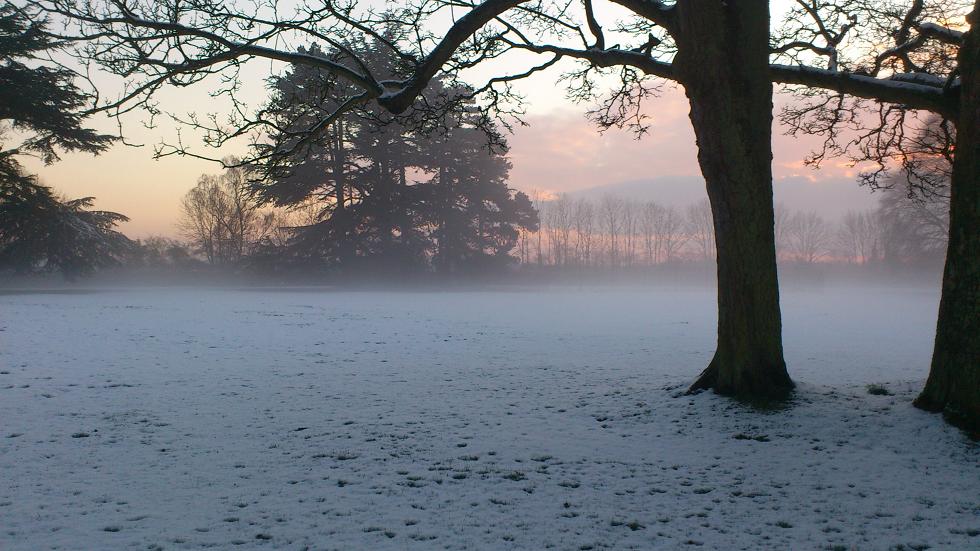 Transport chaos across the county as businesses and schools close and people head home from work during the early afternoon as snow starts to fall heavily across the county. All major routes into and out of Northampton suffer long delays due to the volume of traffic. The condition of the roads is worsened by drifting snow in a biting wind. Bus services out of Northampton are cancelled at 5.00pm and public transport in the town stops shortly afterwards. There are long delays on trains between Northampton and Rugby due to signal failure.

Further light snow falls across the county in the early hours resulting in 10cm of accumulated snowfall at Pitsford at 0900GMT. Snow lies even deeper in drifts in exposed fields.

Images in and around Pitsford on the morning of 19 January 2013. Click to enlarge the image into a new window.

Further snow falls across the county, light at first during the morning but turning moderate later and continuing all day. 15cm of lying snow is recorded at Pitsford at 0900GMT on the 21st. Icy conditions prompt the closure of 290 schools across Northamptonshire and the morning rush hour is unusually quiet as many stay at home. 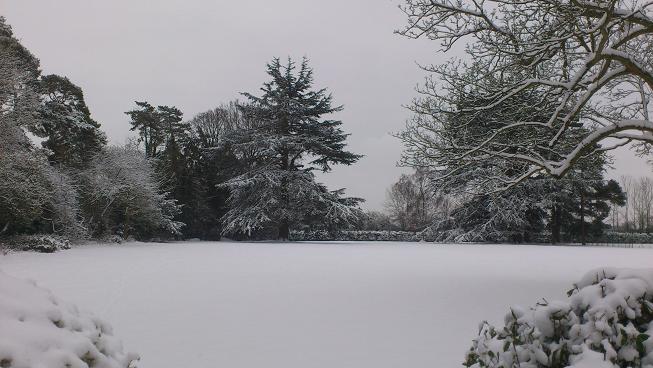 Prolonged rain turns eventually to heavy snow during the early evening on the 10th, producing blizzard conditions at times in the strong south-easterly wind. 8.0cm of lying snow is recorded at Pitsford at 0900hrs on the 11th. Light snow continues to fall during the morning and early afternoon. 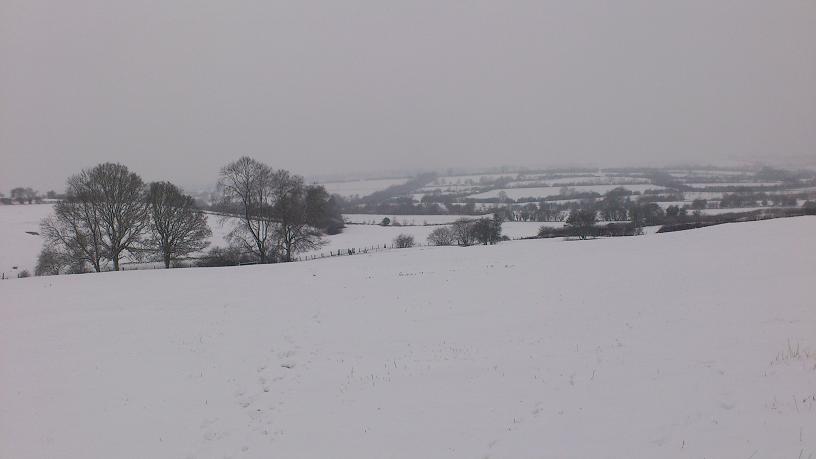 The Brampton valley from Brixworth following heavy snowfall on the 11th February.

Snow showers during the day, becoming heavier and more prolonged overnight leading to 12cm of lying snow at Pitsford on the morning of the 23rd. The snow is accompanied by a bitterly cold easterly breeze causing some drifting of lying snow. Further overnight snow into the 24th results in an additional 2cm by 0900 on the 24th.

Latest predictions are for the current cold spell to continue for the remainder of this week and into the Easter weekend. With further light flurries of snow expected on most days, the county could very well see a white Easter. The last time this happened was Easter Sunday (23rd March) in 2008. In fact, temperatures during March have on average been around 4.5C below the monthly average. With little improvement in temperatures expected between now and the end of the month, March 2013 could end up being the coldest March in Northampton since 1962.

The warmest day in March was the 4th which saw temperatures climb to around 10C, but for much of the month daytime temperatures remained in single figures, reaching only 0.4C on the 24th. Rainfall amounts were up on average with 68.0mm recorded over the month. However, a good amount of this was in the form of snow. Snowfall was recorded on 13 days in March.

There is no immediate end in sight to the current cold spell. The forecast is for high pressure to remain fixed to the north of the UK for at least the next 2 weeks maintaining the flow of cold air from the east.

Daytime temperatures at Pitsford reach 31.0C, the first time temperatures locally have topped 30C since 2006. The last recorded maximum in excess of 30C was 30.3C on 26th July 2006. In that month daytime temperatures exceeded 30C on 7 occasions with the highest maximum being 35.5C on 21st July. The warmth and high humidity on the 22nd result in a thundery breakdown the following day. No rain is recorded at Pitsford for 17 days between 3rd and 19th, and the protracted spell of warm summer sunshine is something that the county has not seen for many years. Daytime temperatures range typically from the mid to high 20s. 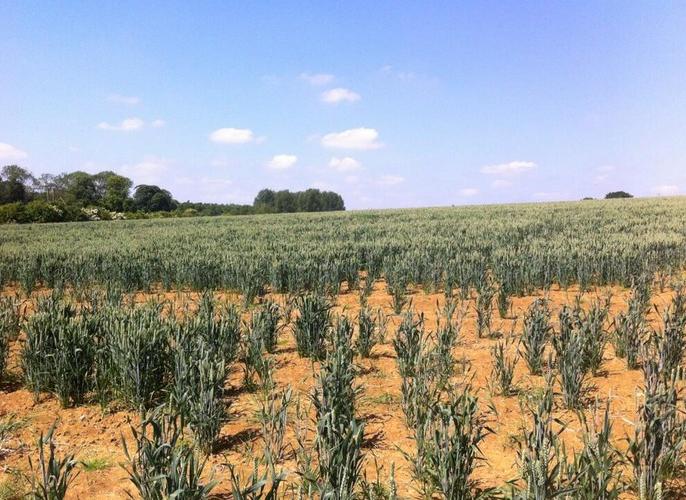 Wheat suffering from the prolonged dry and warm spell during July.

The county escapes the destruction wrought by storm St Jude which cuts a swathe across southern England overnight on the 27th into the 28th. Although wind speeds of up to 99mph are recorded on the Isle of Wight, Pitsford only records a maximum gust of 36mph. Despite the modest wind speeds, the county does record sizeable rainfall amounts which result in localised flooding. 36.9mm of rain is recorded in the 24 hour period up until 0900 GMT on the 28th, most of which falling in the early hours. 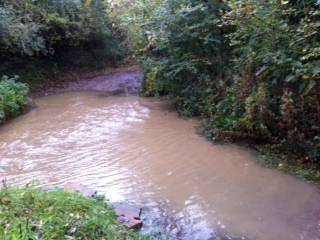 Swollen ford at Spectacle Lane between Pitsford and Moulton following the heavy rain which accompanied storm St Jude on 28 October.

Vivid sunrise foretells a day of wild weather across the county. Wind speeds increase steadily through the day culminating in a squall with hail and a peak wind gust of 62mph. Beyond the county, a storm surge affects eastern coastal counties. High water exceeds the levels of 1953 tidal surge which claimed the lives of 307 people. However, investment in sea defences results in relatively little damage to property. 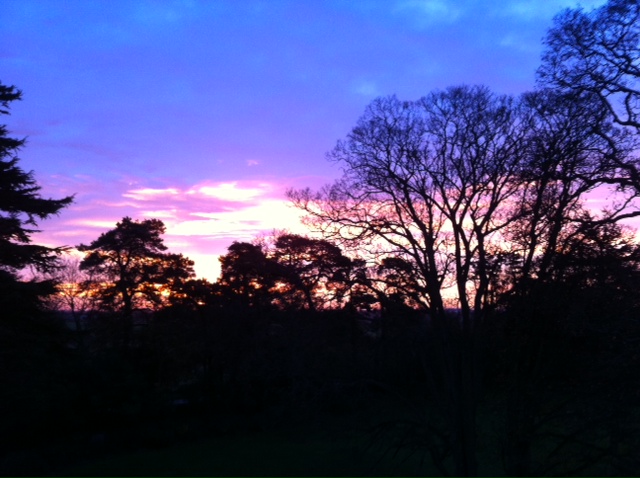 Morning sunrise at Pitsford on 5 December. 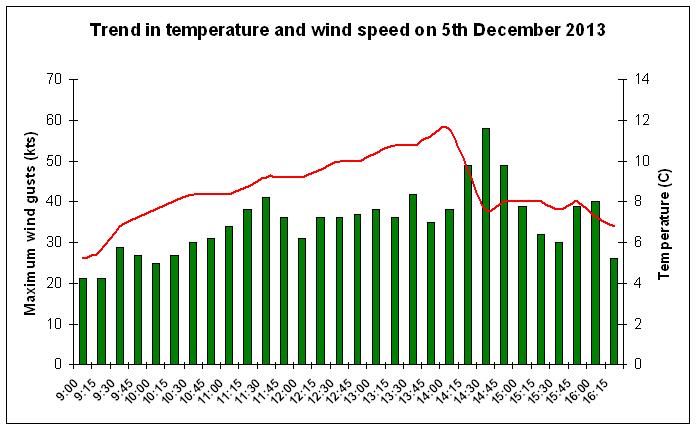 Trend of wind speed and temperature before and after the squall on 5th December.