29 January
The switch to a cold Arctic airstream feeds in moderate snow showers across the county during the afternoon with some accumulation. There is little disruption on the roads during the evening rush hour, but further snow showers occur during the late evening. 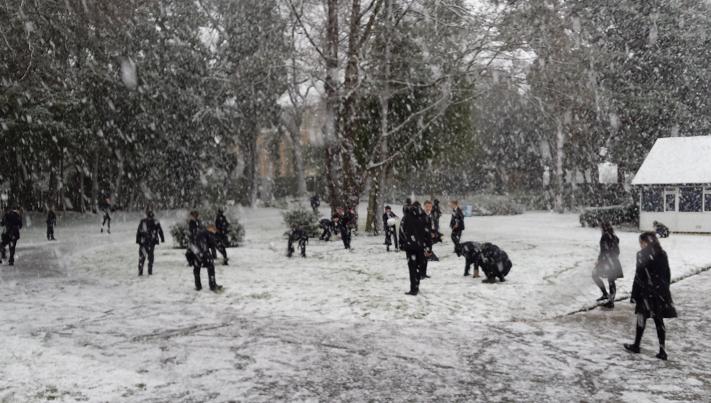 Children at Pitsford School enjoying the snow on 29th January.

30 January
Moderate falls of snow overnight result in some disruption to travel during the morning rush hour. Several accidents are reported across the county. The A43 was partly blocked owing to an accident at junction 5, and hazardous driving conditions caused problems at numerous points along the A508 between Lamport and Boughton. The A45 was also partly blocked owing to a broken down car. 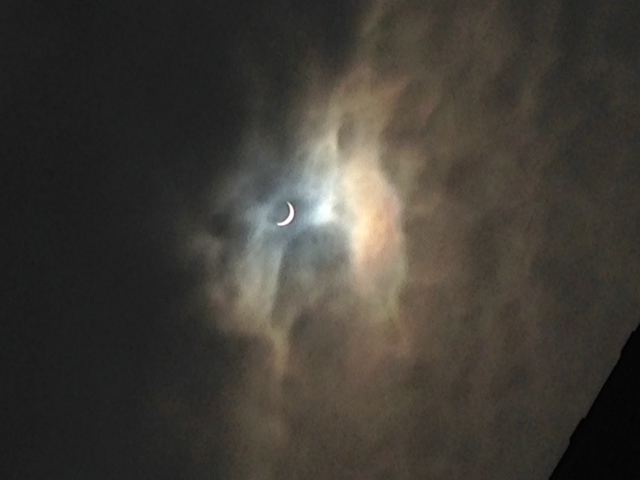 A partial eclipse of the sun is observed across the British Isles. The maximum eclipse at Pitsford at 9:32 GMT sees 88% of the solar disc covered by the Moon. Clearance of early morning mist and low cloud allows good viewing of the phenomenon from around 08:15.  Some notable short-term changes are observed in the weather, most notably two spells of temperature decrease.  The first fall occurs quite suddenly between 08:55 and 09:00, dropping from 6.0C to 5.2C. This is then followed by a slight rise to 5.8C by 09:12, after which the main decrease is observed to 4.4C at 09:40. The trend of temperature closely matches that of solar radiation, but with a lag of 3-4 minutes. Other notable changes include a decrease in cloud amounts to practically clear skies at 09:34. The main cloud types observed are cirrocumulus, cirrostratus and stratocumulus visible to the south; skies remain clear to the north. A notable increase of cirrocumulus is observed shortly before maximum eclipse at 09:30 as other cloud types dissappeared. In terms of wind strength, the day starts calm and remains so until 10:09 when a light southerly breeze picks up, veering north-westerly over the next hour. The breeze  then fluctuates between NW and SSW. A slight fall in barometric pressure is recorded before and during the eclipse, but the decrease becomes more rapid afterwards undoubtedly triggering the increase in wind. 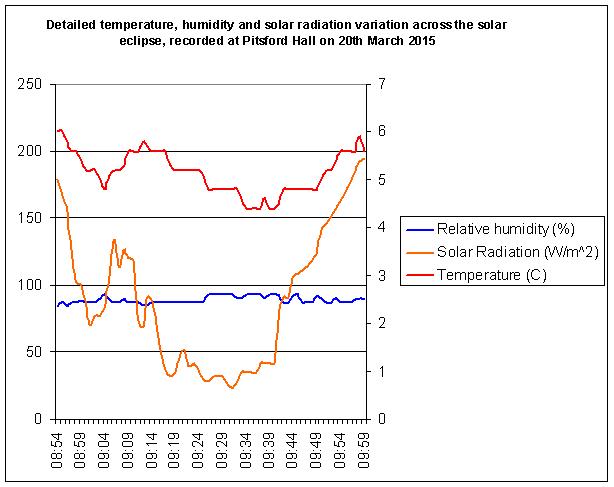 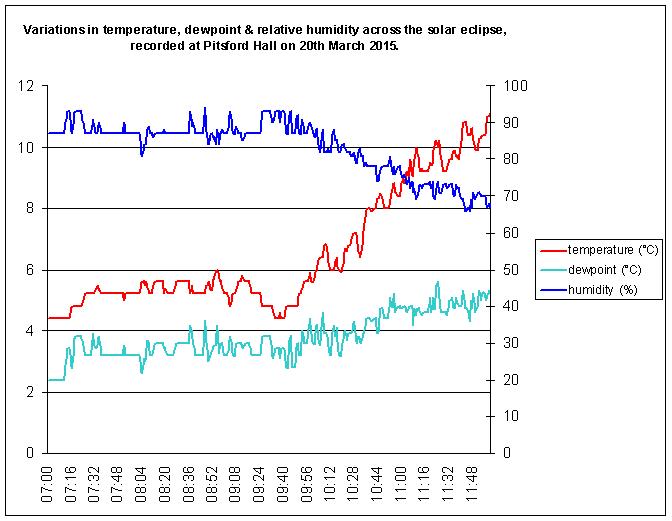 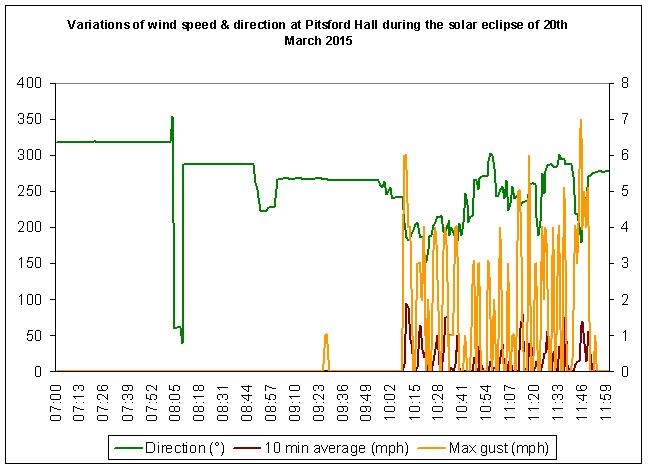 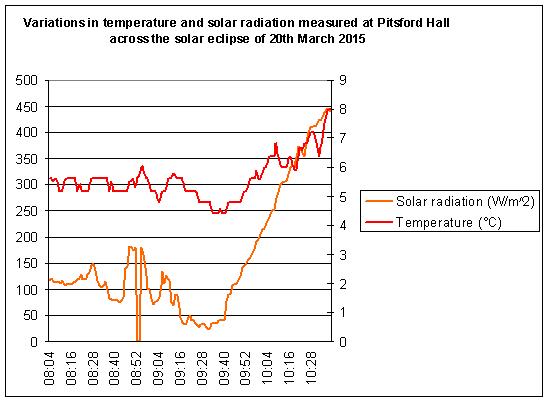 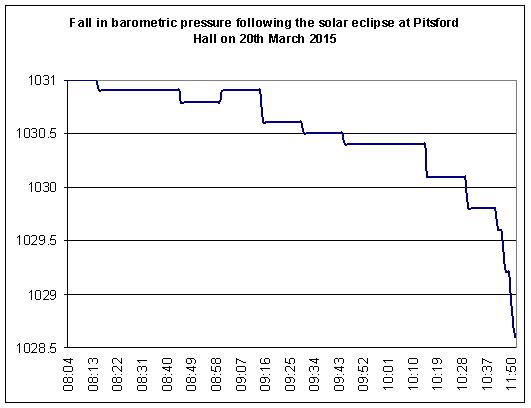 Above: reduction in barometric pressure; visible satellite image taken at 09:30 showing the shadow cast by the Moon and clearance of cloud.

Strong winds continue to batter the county since the 29th. Gusts at Pitsford Hall reach 61mph at 10:44 BST and a gale is registered on 3 separate occasions during the day. The strong winds cause travel disruption on the roads owing to fallen trees and some structural damage is reported to some buildings across the county.

Following a relatively cool June with average temperatures below average for the time of year, July starts with a mini heatwave. Daytime temperatures at Pitsford reach 34.0C making this the warmest July day locally since 2006. This follows 29.0C recorded as the warmest day in June on the 30th.

A tornado is reported in Northampton during an unsettled day with thunderstorms and squally showers. The tornado strikes Duston at around 12.30pm and causes some minor damage to houses, dislodging roof tiles which in turn damage cars parked near St Luke's Primary School. The last occasion a tornado was recorded in Northampton was in 2007. 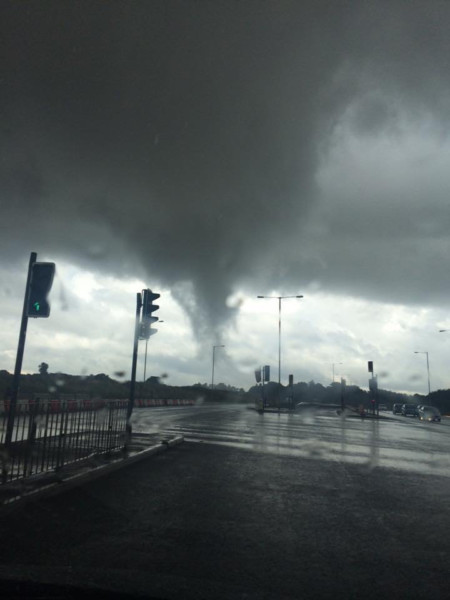 Temperatures at Pitsford reach 15.4C on the 18th making this the mildest December day since 1974. In fact, December as a month is unseasonably mild. Daytime maxima have so far exceeded 12.0C on 11 occasions, and have exceed 14.0C on 3 occasions. This compares with a usual December maximum of 7.5C. So far, there have been no air frosts this month. The lowest overnight maximum was 2.0C on the 12th. The El Niño phenomenon currently being experienced in the Pacific Ocean is widely regarded as being the cause of the exceptionally mild winter so far. However, others are more cautious as pointing to the previous  El Niño as having resulted in a particular cold winter in 2010 when temperatures in January fell 2.4C below average. The link between El Niño events and British winters is largely unclear. December 2009 was much colder, not milder as it is now.