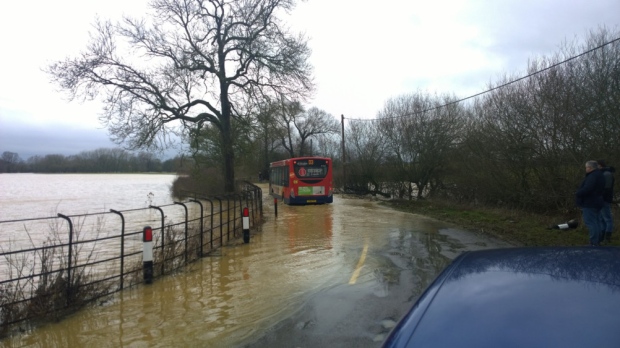 Heavy rain overnight causes widespread flooding and transport disruption across the county. A total of 33.8mm of rain is recorded at Pitsford over the 48 hour period from 0900hrs on the 8th to 0900hrs on the 10th. Train services from Northampton are suspended due to flooding of the line and signal failure and several minor roads are made impassable in and around Brixworth, Welford, Moulton, Nether Heyford, Tiffield and Charwelton. Police and fire officers evacuate a school in Corby as well as a number of houses in Yelvertoft. Campion School closes just after 1pm and surrounding roads threaten to become impassable.

The heavy rain on the 9th continues to cause problems across the county as surface floodwater begins to work its way into the local river system. 300 caravans are evacuated at Billing Aquadrome and the Environment Agency releases a flood warning for the River Nene between Wellingborough and Thrapston.

Prolonged and heavy rain causes localised flooding across the county. The road between Brixworth and Spratton is closed due to flooding around the Brampton Brook. A storm total of 8.2mm is recorded at Pitsford, with particularly heavy downpours being recorded during the late morning. 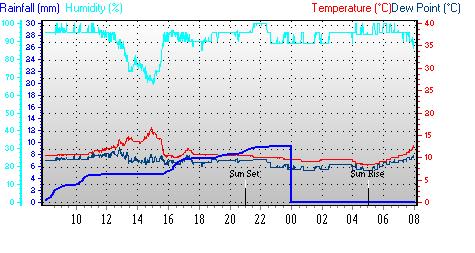 Record from the AWS at Pitsford showing the pattern of rainfall on 18 May.

A very humid day ends with violent thunderstorms across the county. Two torrential downpours are recorded at Pitsford, both with a peak rainfall rate of 36mm/hr - one at 18:20 BST on the 12th and the second at 01:30 BST on the 13th. A tornado is reported in Towcester. The tornado forms first around Jacks Hill cafe on the A5, and then travels southwards across the A43, and through The Shires estate in Towcester, and then contiues. towards Milton Keynes. 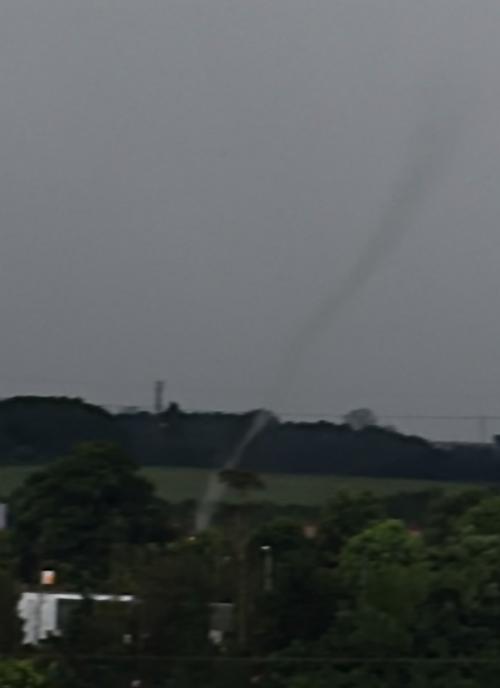 Tornado photographed near Towcester during violent storms on the evening of 12th June.

After climbing steadily since the 15th, temperatures at Pitsford peak at 33.4C making this the warmest day locally since the same day in July 2006. Then a peak temperature of 35.5C was recorded, the hottest day recorded at this site since its inception in 1998. The highest ever recorded temperature in Northampton (Raunds) was 36.7C recorded on 9th August 1911, a figure which for many years stood as the UK temperature record. The overnight minimum on the 20th fell no lower than 19.6C, making this also the warmest night since 20th July 2006.

High pressure nudges into the far south-eastern corner of the British Isles introducing a mini heatwave across the county. Temperatures at Pitsford reach 29.3C. For many areas, this is the hottest day of the year so far with temperatures in Gravesend, Kent, reaching 33.6C. The high pulls away on the 24th introducing outbreaks of rain. However, the warmth coupled with the additional moisture make for an exceptionally humid day on the 25th with daytime humidity values remaining above 80%.

Graph showing the change in humidity over the 3 days leading up to an including the very humid day of the 25th. The same day photographed below. 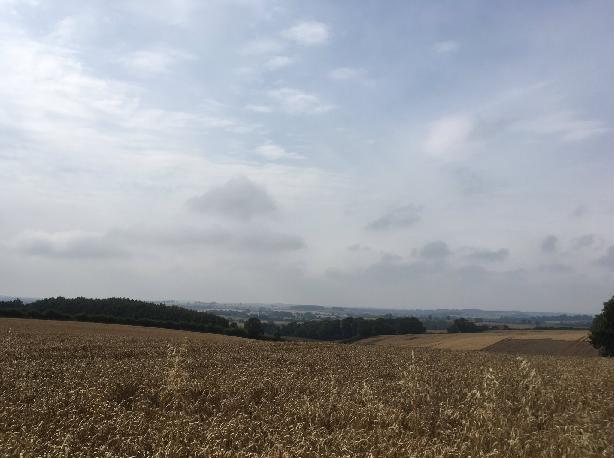 The day starts calmly with just one or two isolated light showers and spells of sunshine. However, by the afternoon unusual asperatus and arcus cloud had formed widely across the county culminating in spectacular thunderstorms. 12.2mm of rainfall is recorded at Pitsford with a peak rainfall intensity at 16:37 BST of 33.6 mm/hr. The greatest hourly rainfall is recorded at 17:06 BST (6.5mm). 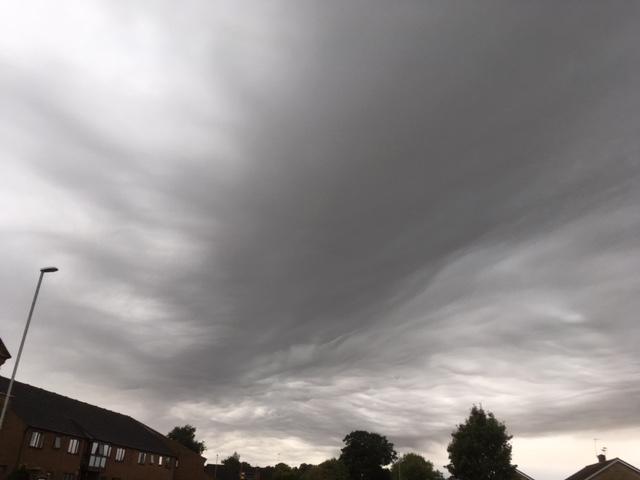 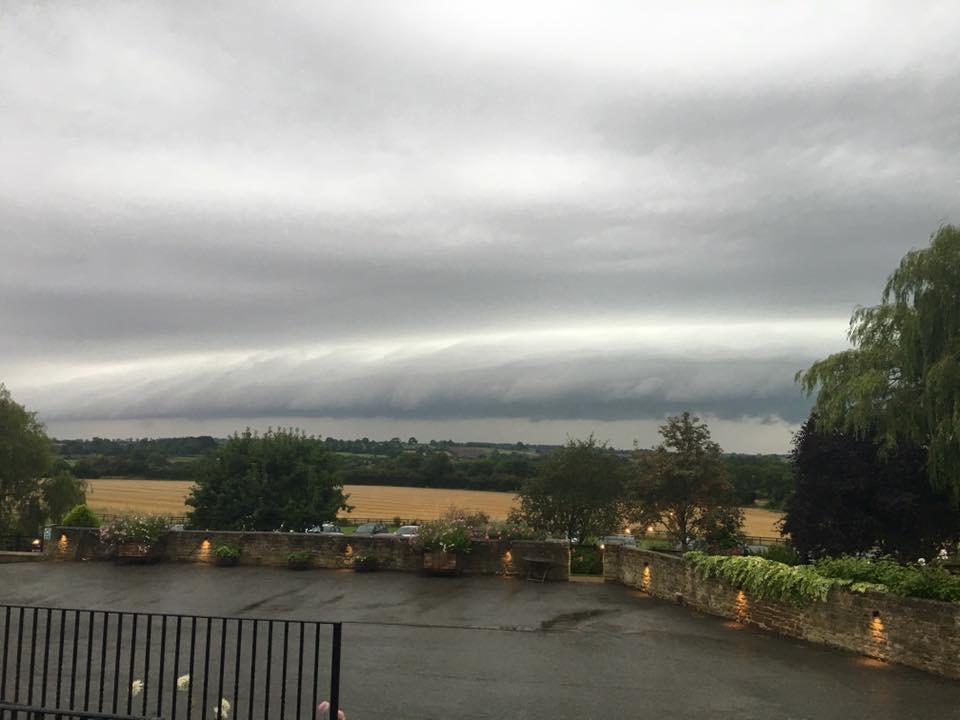 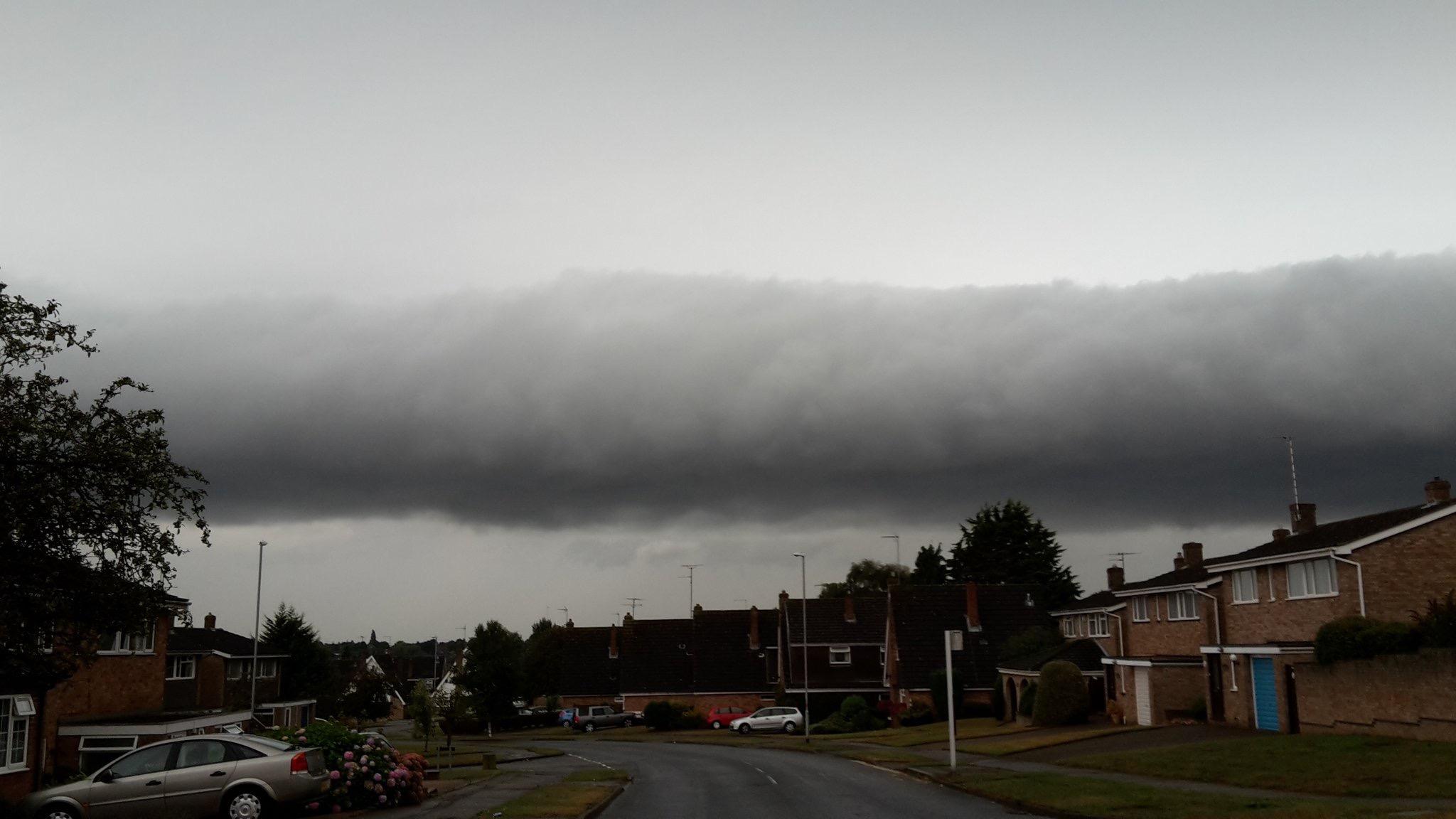 Pictured above - the various asperatus cloud (top) and arcus (bottom) formations seen across the county as a prelude to the thunderstorms on 27th August. Click on any image to enlarge into a new window.

Following consecutive days in which temperatures rise after a cool and very autumnal start to September, temperatures at Pitsford reach 30.1C at 13:28 BST, making this the warmest September day locally since 1921. The 14th also is a hot day with temperatures reaching 28.8C. 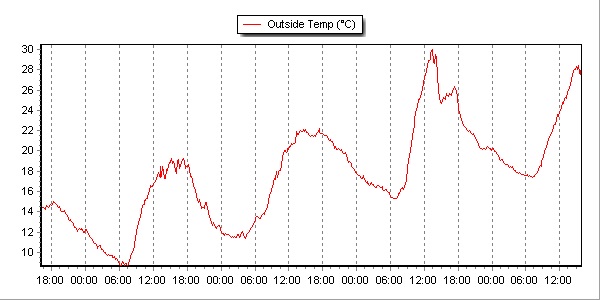 Temperature records at Pitsford in the days leading up to the 30.1C maximum on the 13th September.

The unseasonal warmth comes to a spectacular close overnight on the 15th into the 16th as thunderstorms break out across the county accompanied by torrential downpours of rain. In the 24 hours ending at 10:00 BST on the 16th, 10.7mm of rain is recorded with a peak intensity of 28.8mm/hr at 06:59 BST. A further 8.1mm of rain is recorded on the 16th. The rain causes little disruption within the county, although a landslide and derailment in the Watford area resulted in rail travellers from Northampton to London facing delays of an hour and reduced services.

The arrival of the first named storm of the autumn/winter season, Angus, brings a prolonged period of very unsettled weather to the county. Although the strongest effects of Angus are felt on the south coast, the storm still delivers gusts of up to 29.5mph at Pitsford during the early morning on the 20th. Whilst winds gradually ease during the day, a second low moving on the same track as Angus introduces yet more strong winds, reaching 28.9mph during the morning of the 21st, dying away only very gradually through the day. However, the main feature of the storm across the county is the volume of rain. 43.7mm of rain is recorded between 0900hrs on the 19th and 0900hrs on the 22nd, over 70% over normally expected total for the whole of November.

Temperatures at Pitsford reach 13.4C making this one of the mildest Christmas Days in Northampton in recent years. The warmth is attributed to a warm sector associated with an exceptionally vigorous low, Storm Barbara, which brought strong winds to the county on Christmas Eve.

Cold air driven southwards in the wake of Storm Conor and the added calm afforded by high pressure developing across the south results in a hard frost and widespread mist and fog. The fog is particularly slow to clear from low lying sheltered areas and lingers all day in some areas. Temperatures at Pitsford record a low of -5.1C at 08:23 and remain below freezing until noon. 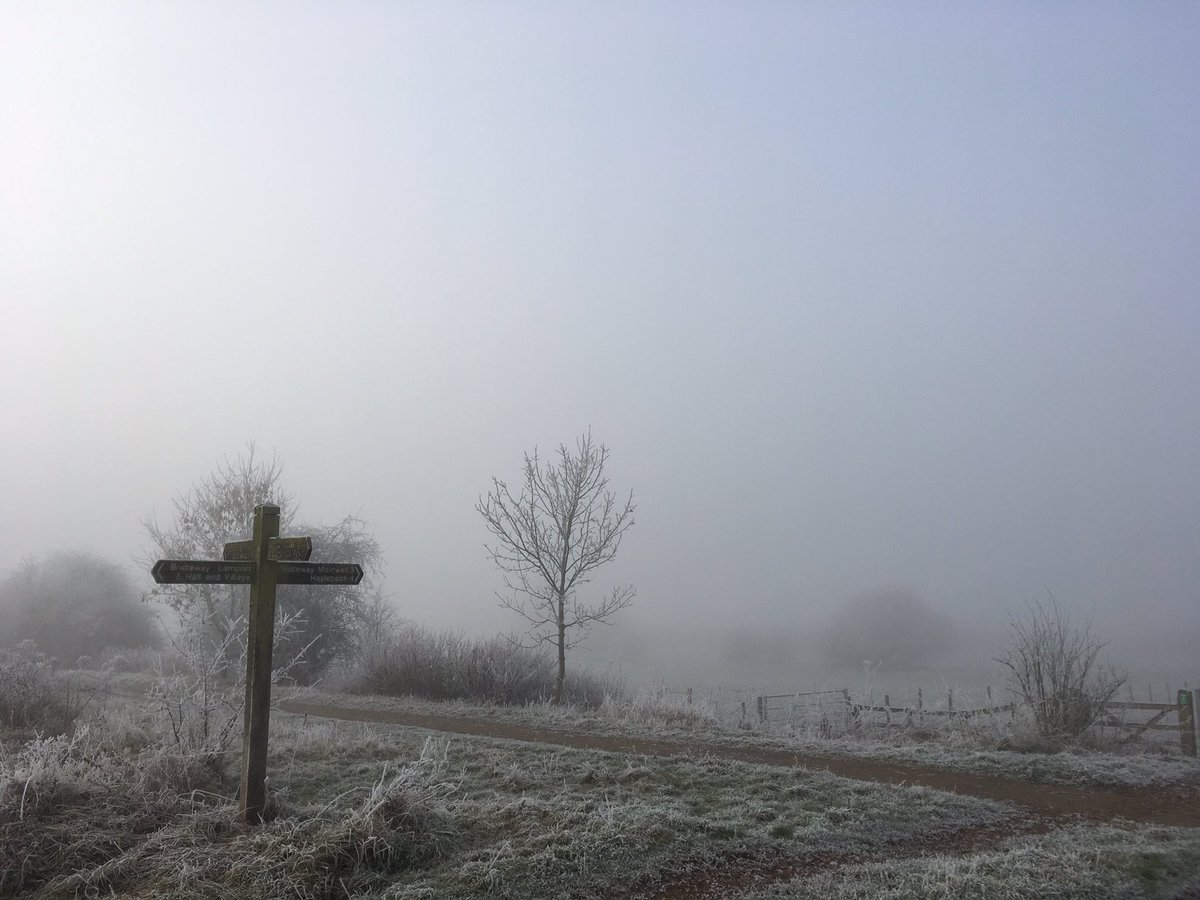 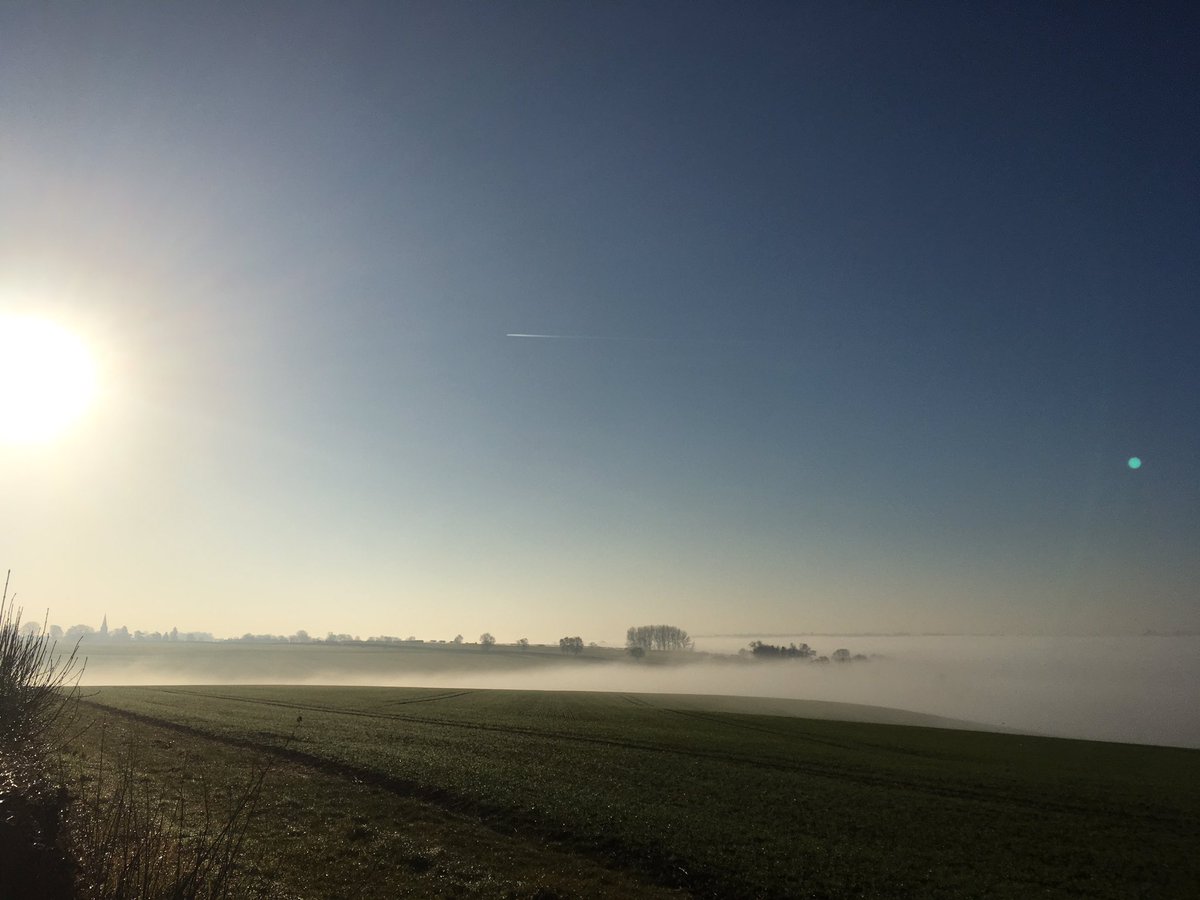 Left: Freezing fog along the Brampton Valley. Right: Brixworth above a sea of valley fog. Both images taken on the morning of 28th December.